The Cincinnati Enquirer’s Seven Days project took an immersive dive into the heroin epidemic and increasing toll of overdoes. The sometimes graphic and often gripping reporting captured the national attention. Because the stories it told got up close with videos, images, families with children and deeply personal moments, the series involved a lot of ethical decision making.

Editor Peter Bhatia explained why the issue warranted a 20-page special section and 30-minute video. The paper assigned more than four dozen reporters and photographers across the metro area to document the heavy burden of heroin.

Dan Horn, one of two reporters who assembled the feeds of the reports, said the most challenging aspect of the story was balancing the need to show the reality of the epidemic without inflicting more pain on the people who are already suffering.

Horn addressed some of those ethical decisions.

Q: Can you tell me how you went about getting consent from victims and those under the influence to be interviewed and recorded? What types of decisions did you make before hitting the streets about how you would approach victims of addiction to be in the story? What was the process of editing like as you tried balanced the rights of people to privacy about a medical issue with having the impact the story does?

Horn: One of the most challenging aspects of this story was balancing the need to show this epidemic as it really is with the desire to not inflict more pain on people who already are suffering. We talked a great deal about this. My colleague, Terry DeMio, wrote the story with me and has covered the heroin epidemic for years. When we spoke to the staff before reporting began, she spoke at length about the need to respect the people we’re covering. She urged everyone not to refer to them as “addicts” and not to assume the worst about them even though we may be seeing them at their worst. It was important for everyone to understand that these are people – mothers, fathers, sons, daughters, parents. They aren’t just addicts. This was a message we also tried to reinforce throughout the story whenever possible. It’s also true, however, that you can’t accurately cover this epidemic without being honest with readers and viewers about what’s happening every day in the community. That was the point of the project, to show people what the heroin epidemic does, every day, every hour. To that end, we knew we’d have to show some ugly things. People who appeared in court or had overdosed on the street or had been arrested typically required no formal consent, though we did our best to follow up through records or interviews. Some people agreed to speak to us after we observed them in public spaces. Others did not. Some who we approached outside of courts or police ride-alongs agreed to speak to us and to even be photographed, but only if we used their first names. Others gave us full access without conditions. Hospitals, treatment centers and the like required the same type of consent we would need for any other story.

This was supposed to be a scene that gave readers some hope and a break from the rough stuff they’d been seeing in most of the other scenes. But 10 days after we interviewed and photographed her, the young mom relapsed and died of a heroin overdose.

Q: How was the editing process handled? What ethical dilemmas were the hardest decisions? Did the story go through approval by lawyers?

Horn: The editing process followed a similar path. We dug into all the raw reporting, photos and video and tried to make decisions that would help us tell the story without being gratuitous. Obviously, we had to make some tough calls. At times, we did consult with our lawyers. As for the hardest decisions, one that comes to mind is the handling of the story about the young mother we profiled at Children’s Hospital. She had been drug-free for a year and was living in a treatment center with her infant daughter. This was supposed to be a scene that gave readers some hope and a break from the rough stuff they’d been seeing in most of the other scenes. But 10 days after we interviewed and photographed her, the young mom relapsed and died of a heroin overdose. The reporter and photographer who had met with her were heartbroken. They reached out to the woman’s family a few days later and talked about what happened. They also talked about how we might handle this scene in the story. Should we drop it? Or keep it with a short epilogue acknowledging what had happened? We all agreed we couldn’t publish as is in our real-time narrative with no acknowledgment of her death. The family made the decision easier. They said we should include the scene. They thought it might help people better understand the tragedy of the epidemic.

Q: How did you make the decision to show the faces of children who were born addicted to heroin or to homes with those living with addiction? What principles did you consider?

Horn: Names and faces of children were only used with the consent of their parents or other legal guardians. We felt it was important to include the stories of children because the heroin epidemic has taken such a toll on them. In just the week we covered, dozens of children’s services cases were opened because of heroin-related issues.

Horn: We talked a lot about this before reporters launched on their assignments, but ultimately we all were guided by the common sense and decency we try to bring to any story we cover. The goal was to be fair and to treat people with respect. At the same time, we knew we would be covering some people on their worst days – heroin is destroying their lives, after all – and that we’d need to include material showing what those days are like. That’s the balancing act this story required. We tried our best to get it right. 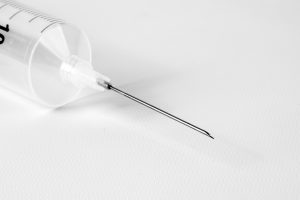