On Wednesday, October 7, Pulitzer Prize-winning U.S. journalist and CBS News correspondent Wesley Lowery was the virtual “journalist-in-residence” and guest speaker for a question-and-answer session hosted by the Center for Journalism Ethics at the University of Wisconsin–Madison.

Lowery was the first prominent journalist to appear in a three-event series organized by UW–Madison and focused on “journalism in extraordinary times.” Moderated by Center for Journalism Ethics Director Kathleen Bartzen Culver and journalism undergraduate student Tamia Fowlkes, Lowery answered questions on the ethics of reporting on racial justice and law enforcement and discussed objectivity in journalism, a topic he covered in an opinion piece for the New York Times this summer.

In answering an initial round of questions on newsroom diversity, Lowery stressed the importance of having journalists from different communities and experiences so that news organizations do not miss out on vital stories and angles.

“One of the things we have to remember is that mainstream news media organizations have only been integrated for a handful of decades,” Lowery said. “It wasn’t until the ‘70s that there were any efforts in earnest in having Black reporters, and much less brown reporters in American newsrooms.”

“I believe [newsroom diversity] is a journalistic imperative: We cover a complex, complicated diverse world and we cover it by access to information. We traffic in information,” Lowery said.

Lowery also spoke about the challenges journalists of color face in predominantly white newsrooms, such as different standards of conduct and tokenization.

He referred to the coverage of the police killings of George Floyd and Breonna Taylor as a challenge for Black journalists in the newsrooms.

“George Floyd happens or Breona Taylor happens and a whole room of white journalists turn to the only Black woman at the end of the table and ask: What are people saying about this? What should we do about this?” Lowery said. “That is a fundamentally impossible position to be in.”

He also said journalists should walk away from things they can’t abide as a means of looking after themselves.

“You are the only one who is protecting your byline, your reputation and your name,” Lowery said.

As for the journalism industry as a whole, Lowery said journalists need to examine their processes to ensure that the methods being used have the intended consequences. Reporters can’t just rely on practices that worked in previous years, since journalism is constantly evolving, he said.

He provided the example of news organizations publishing mugshots — a practice that used to serve the purpose of informing only the local community, but which now result in mugshot photos being available forever on the internet.

“Something that was about informing a community in the short term actually ends up being something that harms an individual in the long term,” Lowey said. “You have a collateral consequence that was not intended because we were following rules that worked at some point, that might be incorrect right now because of the internet.”

Along with this, he pointed out that the idea of “objectivity” wasn’t originally meant to apply to individual reporters but instead to the method of reporting — precisely because no individual is perfectly objective, without preconceptions and beliefs about issues.

Objectivity initially served as an acknowledgement that reporters have political beliefs, Lowery said, but recently focus has shifted onto individuals becoming “objective journalists” whose work can be discredited when others uncover evidence of political leanings.

This new definition of objectivity has also earned new synonyms for the term, such as “balance” and “fairness,” Lowery said, which do not mean the same thing. Some reporters then take this idea of “objectivity” to levels where it becomes performative.

“It is cases where it’s a performative objectivity,” Lowey said, providing a hypothetical scenario. “You’re writing pieces on climate change and you’re going out of your way to find a climate denier or scientist so that no one can argue that you did not have that voice included even if there is no factual basis to include them.”

Lowery also wants the journalism industry to break its reliance on speed to allow reporters the time to get the full story, put it in context and spell it out when you don’t know something.

This is also true of stories on police violence, a topic Lowery addressed in his piece for the New York Times. Reporters should examine the way they write about police, he said, and ask themselves if they’re advancing the truth with each story and holding powerful people accountable.

“A police officer is the most powerful person most Americans will encounter in their lives. Donald Trump, Hillary Clinton and Joe Biden, they can’t pull out a gun and shoot you in the chest,” Lowery said.

“Every single sworn police officer in the country can do that. That’s an extreme amount of power,” Lowery said. “Power can require skepticism. It requires accountability and the press is supposed to play that role.”

Journalists can write about the facts of what happened without using laudatory language, Lowery said, such as “in the line of duty” — a phrase that isn’t applied to other public servants like garbage workers or city council members. The framing of words like “armed” and “unarmed” aren’t neutral, Lowery said, and signal to an audience how they should feel about a story.

And lastly, Lowery talked about the media’s coverage of Senator Kamala Harris as being a prominent person of color in the midst of the 2020 elections.

“The media has had a real trouble understanding the complexity of Kamala Harris’s identity being the daughter of a Black Jamaican man and an Indian woman,” Lowery said. “In Black communities that’s not particularly complex because Black communities have always been diverse in this way.”

To watch the entire session with Lowery, navigate here. 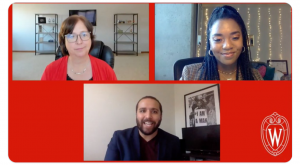