“At a time when drone use in reporting is expected to grow quickly, I’m delighted the Center for Journalism Ethics can help encourage responsible practice,” said Center Director Kathleen Bartzen Culver, who has been studying the legal and ethical implications of drones in journalism for five years. “These partners are leaders in this field, and I’m proud we’re working alongside them.”

Unmanned Aerial Vehicles (UAVs) — known to most as drones — present tremendous opportunities for journalists. They can be used to report on environmental issues, natural disasters, and other news issues and events. But they also pose important concerns, including safety and privacy. This hands-on training will not only prepare journalists to successful earn FAA certification to fly, but also focus on the law and ethics involved.

Thanks to Google’s generous sponsorship, the three-day training is offered for $295. Journalists, journalism educators and serious students preparing for drone flight are welcome to attend. Please visit http://about.poynter.org/training/in-person/drones-17 for more information.

News Release from The Poynter Institute

Hands-on workshops, offered from March to August at universities from coast to coast, will offer training on safe drone operations as well as information that drone pilots need to study for the Federal Aviation Administration’s new Part 107 Drone Pilot’s Certificate. In addition, the three-day workshops will focus on the legal and ethical issues of drone journalism, community best practices and coordinated operations in a breaking news environment, as well as explore ways drone photography can be used in innovative storytelling.

“As a certified drone pilot myself, I know how difficult the exam can be for people who have no other pilot training,” said Poynter’s Al Tompkins, who is organizing the workshops. “Our goal is not to make you ‘test-ready’ but to show you what will be on the exam and to give you the fundamental knowledge you will need to study for the test.”

“We’re dedicated to supporting journalists’ experimentation with new technology,” said Erica Anderson of Google News Lab. “Drones present an opportunity for journalists to tell stories in visually rich and immersive ways, but there are still many open questions on how to apply them safely, ethically and creatively for news reporting. We couldn’t be more pleased to partner with The Poynter Institute on the drone journalism program to help tackle these challenges.”

Poynter will be leading these workshops in partnership with the Drone Journalism Lab at the University of Nebraska, the National Press Photographers Association (NPPA), the Google News Lab and DJI. Additional online training will be available later this year via Poynter’s e-learning platform, News University.

“Drones are purpose-built context machines. They can, in less time and at vastly reduced costs, give a viewer an understanding of the scale and scope of a story unlike anything else journalists have in the toolbox,” said the Drone Journalism Lab’s Matt Waite, who has become a leading voice for drone journalism through his work at the University of Nebraska. “Just getting a drone straight up 100 feet in the air has the power to change our understanding of how big, how far, how wide, how massive something is. And it can be done safely and for very little cost.”

The workshops also will include NPPA’s legal counsel Mickey H. Osterreicher, who has worked for years speaking on behalf of journalists as the federal government drafted regulations for where and when drone journalists could fly.

“NPPA has been at the forefront in advocating for the use of drones for newsgathering. With that opportunity comes an inherent role of operating them in a legal, safe and responsible manner,” Osterreicher said.  The legal landscape is especially complex because state and local governments increasingly are imposing their own restrictions on drone flights.

The program also will feature hands-on introductory flight training sponsored by DJI, the global leader in drone technology and 2016 winner of NPPA’s Lemen award for technology innovation in photojournalism.  “We are thrilled to join with Poynter to empower journalists with state-of-the-art technology that inspires innovative storytelling,” said DJI policy lead Jon Resnick.

Participation at each hands-on workshop will be limited to the first 60 people to register. Workshop details are available at http://about.poynter.org/training/in-person/drones-17.

Google’s mission is to organize the world’s information and make it universally accessible and useful. Google created the News Lab to support the creation and distribution of the information that keeps people informed about what’s happening in the world today—quality journalism. Today’s news organizations and media entrepreneurs are inventing new ways to discover, create and distribute news content—and Google News Lab is here to provide tools, data and programs designed to help.

About the Drone Journalism Lab at the University of Nebraska

The College of Journalism and Mass Communications at the University of Nebraska-Lincoln established the Drone Journalism Lab in November 2011 as part of a broad digital journalism and innovation strategy. Journalism is evolving rapidly, and journalism education must evolve with it, teaching new tools and storytelling strategies while remaining true to the core principles and ethics of journalism. The lab was started by Professor Matt Waite as a way to explore how drones could be used for reporting.

About the National Press Photographers Association

Founded in 2006, DJI is a global industry leader in high performance and easy-to-use aerial camera systems for recreational and commercial use. DJI products empower people of all skill levels to take to the skies and capture images that were once out of their reach. The company places heavy emphasis on R&D and innovation, and is committed to bringing aerial photography and videography to all. DJI currently has business operations in the United States, Europe, Japan, Hong Kong and mainland China.

About The Poynter Institute

The Poynter Institute for Media Studies is a global leader in journalism education and a strategy center that stands for uncompromising excellence in journalism, media and 21st century public discourse. Poynter faculty teach seminars and workshops at the Institute in St. Petersburg, Fla., and at conferences and organizational sites around the world. Its e-learning division, News University, www.newsu.org, offers the world’s largest online journalism curriculum in 7 languages, with more than 400 interactive courses and 330,000 registered users in more than 200 countries. The Institute’s website, www.poynter.org, produces 24-hour coverage of news about media, ethics, technology, the business of news and the trends that currently define and redefine journalism news reporting. The world’s top journalists and media innovators come to Poynter to learn and teach new generations of reporters, storytellers, media inventors, designers, visual journalists, documentarians and broadcast producers, and to build public awareness about journalism, media, the First Amendment and protected discourse that serves democracy and the public good.
Contact: Tina Dyakon
Director of Advertising and Marketing
The Poynter Institute
tdyakon@poynter.org
727-553-4343 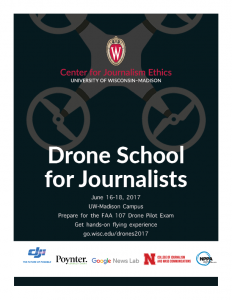