More than a decade after covering Hurricane Katrina for The (New Orleans) Times-Picayune, John Pope, a member of the team that won two Pultizer Prizes, remembers how live-blogging, a relatively new media technology at the time, improved his publication’s coverage of the storm.

“The beauty of blogging is that you don’t need a fully formed story,” Pope said.

During the storm, NOLA.com became a place where millions of people went to read about Katrina’s impact and its aftermath. Stories were continuously updated. And a community bulletin board was created to allow people who needed help in New Orleans to post their location and ask for assistance.

“When you go live, you have to realize that you can’t take it back. What comes in the lens is what goes out the pipe,” Tompkins said. “You may see things you may not have wanted to see or show things you didn’t intend for people to see.”

But developments in technology in the years since have continued to change how reporters cover disasters. In turn, reporters are tasked with making new, difficult ethical decisions.

Al Tompkins, of The Poynter Institute, notes the ease a publication can produce content in real time has drastically improved since Katrina.

“It’s so much easier to go live from anywhere then it was 10 or 15 years ago,” Tompkins said.

Tompkins, though, warns that just because reporters can go live from almost anywhere, publications shouldn’t put their writers at physical risk.

“When you go live, you have to realize that you can’t take it back. What comes in the lens is what goes out the pipe,” Tompkins said. “You may see things you may not have wanted to see or show things you didn’t intend for people to see.”

Social media also complicated natural disaster coverage. While journalists are now able to communicate with their audiences more efficiently, reporters feel pressure to get information out without compromising accuracy.

“With a tweet or a blog, you get something out quickly,” Pope, now a contributing writer for the Times-Picayune, said. “But you better be sure that it’s right.”

“Don’t let the intensity of the moment rob you of your common sense,” Pope said.

Various technological tools, however, can reduce the chance of sharing fake disaster images:

Still, even with improved technologies and additional ethical concerns, many of the same principles of disaster reporting that existed prior to digital technology remain important.

Tompkins said that a newsrooms have an ethical responsibility to continue long term reporting on storms, and thoroughly cover their aftermath. Stories about people falsifying charitable fundraisers or grant applications and city waste are common story themes published in the wake of disasters. Though Tompkins also said that journalists shouldn’t just look for stories that are negative.

“It’s important to do that to show that this was a terrible thing that happened,” Tompkins said. “But people really are resilient and sometimes people are there very best when things are at their very worst.”

Pope added that empathy, especially while reporting in real-time, is essential. But more than anything, Pope said that remembering to be inquisitive, yet fair when reporting on the scene is of the utmost importance.

“Don’t let the intensity of the moment rob you of your common sense,” Pope said. “Ask questions. Be sure of what you’re saying, verify what you’re saying. If you think it may be the biggest flood since Noah, get someone to tell you so, don’t just go on your own supposition.” 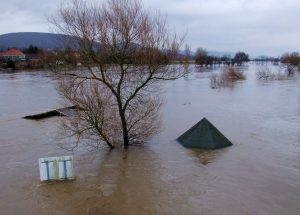