Reporting on Justin Gillis’s keynote address at the 2018 “Division, Denial & Journalism Ethics” conference at the University of Wisconsin–Madison.

In recent years, Justin Gillis, former lead writer on climate science at The New York Times and a current contributing opinion writer for the newspaper, has seen an increased awareness in the American public about climate change.

Gillis says that this added awareness is a function of two factors: an increase in the amount of journalism on the topic, and simple, daily observation.

“People are trying to figure out why things are changing in my backyard, and then they’re seeing this journalism that explains it,” he said. “[Journalism’s] slowly working, it’s just that the problem is urgent.” 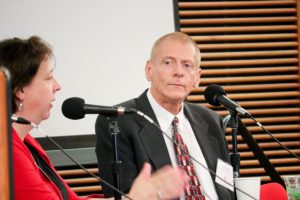 Justin Gillis in conversation with Katy Culver at the 2018 Center for Journalism Ethics conference.

Speaking in late-April at the Center for Journalism Ethics’ “Division, Denial and Journalism Ethics,” conference, Gillis discussed some of the challenges that science journalists have in explaining complex concepts to the American public.

Topics are often highly nuanced and difficult to explain to an average reader. Debates over sources of information can also further complicate discussions. Gillis seeks to cover science fairly and says that false balance (equating a position with a large swath of evidence with a position with far less evidence) has historically been a problem in coverage of the environment.

But it’s one part of the profession he sees as improving.

“This is less and less of a problem now in American journalism, at least on climate,” Gillis added.

Gillis discussed how changes in the climate are very real and that those who say that there is no such thing as climate change are “just crazy.”

“We’re in a very deep hole and we’re digging it deeper,” he said.

Climate denial is largely an Anglophone concept, or prevalent in English speaking counties, Gillis said, citing research by Reuters Institute for the Study of Journalism at Oxford. But Gillis doesn’t see climate denial as a major factor in overseas stories. Gillis says that climate denial is “just not part of the journalism” in England, as the “conservative party is just as committed as the labor party to climate action.”

In Germany, Gillis noted that much of the coverage on climate denial is mostly about the “bizarre Americans,” and why those in the United States are preventing major measures to curtail climate change.

Still, despite some challenges, Gillis sees examples of science journalism making a difference in people’s daily lives. Referring to a story he worked on about the importance of LED light bulbs and various others means to improve energy consumption, Gillis said, “I think the story that we did on the front page of The Times ten years ago helped to push that trend forward.” 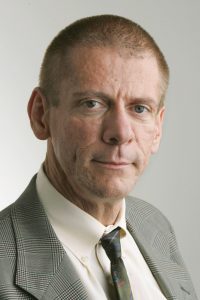