When Amy Silverman of the Arizona Daily Star and her ProPublica collaborators published “State of Denial,” their investigation into the state of Arizona’s services for people with intellectual and developmental disabilities, they included plain language translations of the text.

By using common and clear phrasing to convey the message of the article, the Arizona Daily Star and ProPublica sought to make their report more accessible to individuals with intellectual and developmental disabilities.

The decision wasn’t just unusual. It was likely the first plain language translation done by a mainstream news organization.

Rebecca Monteleone, assistant professor of disability studies at the University of Toledo, worked with Silverman to provide the translation. The Center for Journalism Ethics interviewed Monteleone about her work centering disabled perspectives, the promise of plain language translation and re-considering who your audience is.

This interview has been edited for clarity and concision.

Q: How did you first get involved with “State of Denial,” the investigation led by Amy Silverman?

A: I have experience writing plain language from several perspectives. It’s something that’s part of my academic work and the research that I do. And then I’ve also done a lot of work with disability organizations to provide plain language translations of policy and informational documents. I think you’ve probably learned that there isn’t a lot of plain language happening in mainstream journalism. We were building the boat as we were sailing.

It started when I was hosting a storytelling workshop that was eventually used as a way to talk about the story. Amy was gathering sources as she was building a community with folks in Arizona and we were having conversations about what she was trying to do with the story.  She’s very passionate about making sure that the stories that we’re telling about disability are centering people with disabilities. I shared that I have experience in plain language, which was something she was not familiar with, and we started asking ourselves, is this a possibility?

It became about not just asking people with intellectual disabilities to be sources in a story, but also, there had been very little recognition of people with intellectual disabilities as the audience for media. There still is very little conversation anywhere about that. So that was the impetus for us starting to work together on the plain language translations. And from there, it was really figuring out how to do it. How do we do this in a way that maintains journalistic rigor? The plain language stories had to go through the same kinds of editorial and legal review that the original story went through, which was something that was totally new to me coming from outside of the journalism world.

Q: What is the process of plain language translation?

The end product is a piece of text that is written in a way that eliminates things that seem unnecessary in communicating the story. So it’s changing the way that a story is written, not to take any content out or to censor it in any way, but instead writing it in single clause sentences, using active tense instead of passive tense, using bulleted lists when you can, and changing formatting generally. There’s more white space. You’ve got shorter paragraphs using vocabulary that’s familiar to whoever your reader is going to be rather than leaning on jargon.

You also need to  have a really clear chronology. It’s quite common in journalism to start with an anecdote and then zoom out to the bigger picture and then zoom back in. And so we had conversations about whether the story would lose anything if we put those pieces together in sequence. So that story is told completely in these three paragraphs and then we switch to this other subject.

In this story, there were also direct quotes from representatives of governmental agencies, so they were often kind of difficult to parse. We had conversations about where paraphrasing works, and where does it work to put the quote in its entirety and then have some more explanatory information after that. We checked if there were words that needed to be defined or words that we didn’t need. And so the process itself is not really a translation based on how you might think of it in a sentence-by-sentence or word-by-word basis. It’s really looking at the big shape of the thing, figuring out your outline from there, and going paragraph by paragraph to make sure you have all the relevant information.

Q: Have you seen this plain language translation anywhere else?

A: We had a hard time finding it in journalism. We’re not sure whether, in mainstream journalism, it’s appeared in exactly this form before. But there are disability organizations that use plain language all the time. I think the Autistic Self-Advocacy Network has really great plain language and easy read. I’ve used plain language in research before and I’ve also seen it in a book that came out last summer, an anthology called the Disability Visibility by Alice Wong. In addition to that book, Sara Luterman, an autistic freelance journalist, created a plain language summary.

There’s increasing interest in using plain language, not just in disability services, but in moving beyond that to think about access. Access as in, the way that you would make your website accessible. People with intellectual or cognitive disabilities tend to get left out of the conversation around access.

Q: Do you think mainstream news media have an ethical obligation to translate some or all of their stories?

A: Yes. I come from a disability studies background and if the goal of the news media is to inform, then you have to think about who is in your “public.” And if you’re only writing for a certain audience with a certain reading level or reading familiarity, then you’re not really writing for the whole public. Plain language is specifically relevant in stories that are about disability or intellectual disability, but I think that it should happen in other stories too because people with intellectual disabilities have interests in things that aren’t just disabilities. I do think there’s an obligation to recognize that if your goal is to inform the public, then you need to make sure that you’re actually including the public.

Q: And for the future, what kind of rules or ethical guidelines do you think journalists should follow?

A: In the U.S. at least there aren’t a lot of great guidelines on how to do this. There are a lot of good resources, but I would encourage people to read other plain language to get a sense for the form. There’s the kind that’s just text and there’s the kind that have images that are illustrative of points or use icons. Get really familiar with the form and the other resources about how to do this.

The Plain Language Act, which is a law requiring clear and concise writing in federal governmental documents, has a website with resources. However, the Plain Language Act is not focused on accessibility for intellectual disability, the way other translations are. I always direct people toward a guidance document from the UK charity Mencap called “Am I making myself clear?” It’s a really helpful introduction to accessible writing.

And of course, there are disability organizations doing plain language and easy read. I would say if journalists are interested in investing the time and energy into learning how to do this they need to connect with disability communities. There’s been this whole long history of people doing things for, or about disability, but not doing them with the disability community. It needs to be a collaborative effort because how do you know how to write for an audience that you don’t know anything about?

My number one tip is to find community organizations to partner with and disability advocates to learn from. In order to do this kind of work, I would say the place to start is to make sure people know what plain language is not. It’s not about censoring content, it’s not about talking down to people, condescending down to people. It’s also, really importantly, not a universal access solution. It’s one step toward a greater accessibility, but it’s not the only step. There hasn’t been enough attention paid to including people with intellectual or cognitive disabilities in the news media and so knowing the solution isn’t quite obvious yet.

Q: What are some other ways you think the news media can transform itself in pursuit of being anti-ableist?

A: Talk, talk, talk to disabled people. That’s going to be the number one way to do it. Hire disabled people. That’s the beginning of the transformation, to make sure that that people are in the room. That has historically not been the case in the news media and in many other places. The first step toward moving toward anti-ableism is putting your money where your mouth is and hiring talented, disabled journalists.

I also think getting to know the communities is another huge part of this and being really clear when you’re writing about disability to not just assume that you’re only writing for a non-disabled audience. Recognize that people with disabilities consume the news or should be able to consume the news. It’s not only about the way that you present. It’s also about what you’re writing and making sure that it’s not upholding ablest structures.

Q: Are there any ethical considerations you think journalists should take when seeking out disabled voices or perspectives? 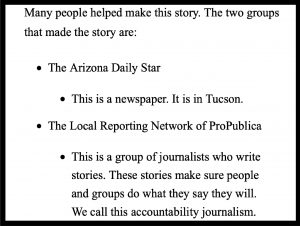