In May 2021, the Dart Center released new guidelines on covering sexual violence in conflict zones, with the goal of filling a critical gap in journalistic training: how to enter a conflict zone and create accurate reporting without furthering harm to survivors of sexual violence.

Gavin Rees, Senior Advisor for Training and Innovation at the Dart Center for Journalism and Trauma at Columbia University Graduate School of Journalism, worked with dozens of experienced journalists to help create the resource. The guidelines are currently available in seven languages – a Ukrainian translation was just released – and will soon be available in three more.

The Center for Journalism Ethics connected with Rees over email about the need for more support and better training in this area, the high stakes for getting it right and the Center’s efforts to deepen the sea change in how people think about reporting on trauma.

What spurred you to create this guide? What are the harms that you see being perpetuated by journalists (and sometimes experienced by journalists) in the absence of a clear guidelines on how to report on sexual violence in conflict?

No journalist reporting on sexual violence wants to do a bad job or cause additional distress. But sadly, it is an area where unintentional mistakes do happen. Journalists are not always aware of the consequences that posing certain questions can have on the mental wellbeing of survivors. They may be the first ones to interview survivors of sexual violence in conflict, but they have rarely had any detailed training in how to do it.

Mistakes in interviewing and reporting can leave survivors feeling invalidated and exploited and can expose sources and their families to shame and even, in some cases, to violent repercussions. The overwhelming nature of the material can also lead to poor choices in how people’s lives are depicted. Reporting can be one-dimensional, overly sensational or stigmatising in different ways. Again, I don’t think that is intentional in most cases, but perhaps more a product of an unfamiliarity with how to work appropriately in a context that can be so unfamiliar and disturbing.

It is hard to make good decisions without a fuller sense of what can go wrong. Take the current situation in Ukraine. Survivors may say they are fine for their picture to be used because they want to play their part in the war effort and bring maximum attention to the consequences of Russian aggression. But waiving anonymity might not be in their long-term interest. Many women made that choice in Bosnia in the 1990s and then regretted the decision.

For these kinds of reasons, we noticed a strong need and interest from practitioners to receive practical guidance to assist them in their work. The guidelines are the result of a collective effort of dozens of filmmakers and journalists who all felt that reporters needed more tools and support.

Covering sexual violence is an ethically difficult and highly sensitive task. But this guide also takes into consideration the complication of this violence having taken place in a conflict zone. How does the “in conflict” part of this change the things the journalists need to consider?

Situations of conflict exacerbate existing patterns. For example, sexual violence often becomes more brutal and widespread; survivors are at greater risks of facing reprisals. Journalists also need to consider that in conflict, sexual violence is often employed as a tool or strategy. Conflict-related sexual violence is taking place within a bigger frame, and so it is important that journalists explain the broader dynamics and don’t reduce the story to just the sexual violence dimensions.

And then there is the practical side. Journalists in conflict zones are often under intense time pressure with concerns for their own safety. This can cut across the need to give these sensitive conversations the full time they need.

Unlike many guides offering practical solutions to doing difficult journalistic work, this one begins by asking journalists to first ask themselves three foundational questions, “Am I sufficiently prepared for this?” “Should we be interviewing this person, in this time, and in this place?” and “Does my interviewee fully understand what they are signing up for?” Why did you decide to begin there?

We start with these questions because the stakes for survivors can be so high. Stigmatisation, ostracization, and, in some cases, death are all possibilities. Even in situations where the context is less drastic, we should always be aware that an individual survivor’s story belongs to that person, not to the journalist, nor to the public. It is vital that somebody fully understands what they are getting into when they tell their story. They might not understand that even if they are talking to a foreign journalist, their picture or video could be accessible on the internet or even end up being clipped and broadcast by a local news channel. Due diligence means making sure that every survivor interviewed knows what they are getting into.

Preparation, then, means doing enough research in advance into the security situation and local context to understand what the potential risks for interviews are. In some jurisdictions, for example, being a victim of rape can trigger prosecution for adultery. Journalists also need to understand the local power dynamics and the relationship between the interviewee and those who are acting as intermediaries, be they NGO representatives or community elders. Is there a danger, for example, that consent may not be entirely voluntary or that financial incentives play a role?

Journalists need to take these different factors into account from the start and the questions are meant to guide them: if the answer is not fully ‘yes’, journalists should probably consider whether the interview should take place.

This can happen in many ways. Perhaps, a journalist doesn’t have enough time to do an in-depth interview in a way that is sensitive and contained, but fears that the editor needs that level of detail. Maybe there are people hanging around the interview location that really shouldn’t be listening in. There have been countless situations where NGOs have lined up a single survivor to talk to a whole line of visiting reporters. Having to tell one’s story again and again in an unsafe and invalidating way is one of the things that many survivors describe as being a cause of significant continuing harm.

For the journalist who finds themselves in that situation, do you have any advice on how to manage the expectations of their news organization, or how to create a new plan under time pressure?

This is tricky because we are often talking about freelancers who may not have such strong relationships with editors. I think there is a big responsibility on the latter to create space to game plan these issues before an assignment. What are we going to do if we don’t have enough time, or the venue doesn’t feel right? There is usually a plan B, a different way of covering things or switching focus. But one has to be open to many parameters and possibilities. This is about awareness of editors just as much as reporters. It makes a huge difference when there is sufficient trust in place to have an open conversation and a willingness to solve these problems collaboratively. If that trust is not there then the dynamics can lead to corners being cut, and it can also have a knock-on effect on the quality of the reporting too, leading to work that is not fully honest, not fully present in the realities of the situation.

An interview should never take place because a news organisation has commissioned a particular story and the journalist feels pressured to deliver it. This is not painting by numbers.

How important is it that these guidelines become a shared code of conduct, as opposed to being the responsibility of one diligent reporter? And how could we get there?

I am a great believer in the snowball effect, we all need to do our bit. In the last 15 years, there have already been major changes in awareness about trauma and what it takes to report sensitively and effectively on it. And that passing on of better practice has happened by collective effort, through colleague-to-colleague connection. Clearly more needs to be done, hence these guidelines and their detailed focus on conflict-related sexual violence.

At the Dart Center we are working with individual journalists, but also with editors, trainers, NGOs, and many others to make the document more than guidelines for individuals but to stimulate the discussion and inform policies. Various media training organizations have included the guidelines in their courses, journalism networks have posted them in the resource silos, senior reporters and producers in news organisations are talking about them. If every journalist who finds these guidelines useful passes them onto two colleagues, saying, you really should read this, then that alone can lead to real change.

The Dart Center for Journalism and Trauma is a resource center and global network of journalists, journalism educators and health professionals dedicated to improving media coverage of trauma, conflict and tragedy. It is a project of Columbia University Graduate School of Journalism in New York City, with international satellite offices in London and Melbourne. 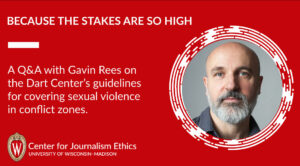