Audrey Thibert is a 2022-23 fellow at the Center for Journalism Ethics and an undergraduate student in the School of Journalism and Mass Communication at the University of Wisconsin–Madison.

Like many journalists, NPR’s Sarah McCammon is navigating how to cover abortion in a post-Roe world. Abortion may be an old issue – one that has for a long time gathered a lot of heat – but it’s also one that exists in a new legal and social context.

“I don’t use ‘baby killers’ and I don’t use ‘forced birth’ because those are both examples of terminology that people who use them feel very strongly about, but it’s not specific and it could be seen as inflammatory,” McCammon said.

The decades-long debate over what constitutes objective journalism is central to this coverage. To accurately set standards for what reporting on abortion should be, journalists must define what objectivity means in the context of the highly controversial and emotional issue of abortion. This will require attention to language use, as well as to the ethics of reporting on an issue that touches both public policy and medical care.

The need for quality coverage of the issue is also growing. After Roe v. Wade was overturned in June 2022, the American College of Obstetricians and Gynecologists received almost triple the volume of media requests — from about 80 requests per month to about 300. As media coverage increases, it’s crucial that the quality of that coverage does too.

The traditional definition of objective reporting emphasizes the use of neutral language and discourages the use of bias or feelings from the reporter. Often, this means “equal” coverage of both sides of an issue, sometimes resulting in a false equivalence. For Phoebe Petrovic, an investigative reporter at Wisconsin Watch, providing ethical coverage has meant trying to include everyone in the conversation, to achieve a broad spectrum of voices, without at the same time parroting misinformation.

The Marquette Law School poll shows that, much like the rest of the U.S., the overwhelming majority of Wisconsinites (64%) are in favor of abortion rights. But there is still a 36% margin of people who are in favor of the overturn of Roe. These people, according to Petrovic, are people journalists need to acknowledge and report on.

“I need the people at Wisconsin Right to Life and pro-life Wisconsin to talk to me,” Petrovic said. “But I also need to stand firm and say, what you’re saying is not true, if they’re saying something untrue.”

For example, Petrovic said she must discredit claims from groups that assert there’s never a situation in which an abortion is a life-saving procedure – a claim that is medically inaccurate.

For Kate Connors, director of communications & public affairs at ACOG and a former reporter, many attempts at objectivity have often led to issues of false equivalency – giving equal merit to both sides of an argument when one side relies on factual evidence and the other does not.

“One of our experts at ACOG will be quoted in an article representing one side, and then the other side will be someone from, for example, a state Right to Life organization,” Connors said. “Someone who’s not a doctor, not medically trained, has never treated a patient, has never talked to someone in need of an abortion and only has one goal and one goal only and that’s to ban abortion. They’re quoted as equivalent experts, and they’re simply not.”

But it is still crucial to reach and report on all sides of the issue to understand the nuances of the division.

With this responsibility comes the difficult decisions of what voices to broadcast. Over 600 organizations signed a letter drafted by the Physicians for Reproductive Health to “stop giving airtime to anti-abortion extremists.”

But in an August blog post, American author and lawyer Jill Filipovic wrote about why this “de-platforming” is not good journalism. She argues that while abortion is a medical and legal issue, there is no escaping that abortion is also a political issue, with very real moral arguments.

McCammon, too, said it is her goal to portray the world as it is. For her, this means covering abortion as a question of public policy — a system of laws, regulations, actions and funding priorities regarding a topic widely known by a governmental entity or its representatives.

Rather than trying to shape attitudes of public policy, McCammon said journalists should instead provide all the information they can for people to make their own decisions about what the policy should be.

Howard Schweber, professor of political science and legal studies at the University of Wisconsin-Madison, said he thinks there’s plenty of room in objective reporting to point out when people are lying or playing games.

Key to achieving a high level of fairness, objectivity and truth is the language journalists choose to use.

Seasoned journalists such as McCammon are always cognizant of the language they use in their work. She believes that journalists should opt to use medical language. This approach removes journalists from the emotion of the issue and benefits the audience by spreading factual information.

Connors said the biased language in journalism and throughout society is so internalized that people often don’t even know where it’s coming from, or that they are using biased language.

For example, a common terms such as “late-term abortion” were created to make abortion sound cruel, and is not a medical term, according to Connors.

Language is just one consideration. For McCammon, there are many other facets of providing the public with information, including research and explanation of differing points of view. This includes painting a picture of consequences and results of certain policies and telling people’s real-life stories.

The overturn of Roe prompted many women to speak about their experiences with abortion.

Real-life stories can help journalists humanize issues like abortion. While it’s not ethical to try to persuade an audience, Connors sees room for human interest stories in today’s news to help cultivate rationale for the policies.

“Reporting isn’t the same anymore as it used to be,” Connors said. “It’s not just a regurgitation of facts. Reporting is telling stories and helping people make decisions and helping people understand all the things that go into these complex topics. I think if we all were able to apply empathy to the work that we do, the way that reporters have an opportunity to, we’d probably all be better off.”

The legal and social ramifications of sharing these stories, though, have led to increased requests from sources for anonymity.

“We feel it’s important to be able to hear those voices and hear those patient stories firsthand, not have them just talked about in the abstract,” McCammon said. “But we also recognize that in order to do that, sometimes people need to be granted some level of anonymity. I talk to the person about it, about their situation, about why they might or might not want to share their last name.”

McCammon, who has written using different levels of anonymity, always tells interviewees that the more information they are willing to disclose, the more credibility they garner from readers and listeners.

According to a 2020 Pew study, 67% of U.S. adults say the use of anonymous sourcing should only be used in special cases, and 18% say it should never be used. But McCammon and other reporters have to strike a balance between safety and credibility.

“Danger can take a number of different forms,” McCammon said. “Depending on where people live, they could face a variety of repercussions for talking about those experiences.”

And every time anonymity is granted, there must be an editorial conversation to accompany it. NPR always provides a reason for anonymity. For example, in McCammon’s in-depth piece on a woman who got an abortion, the subject was identified as “Elaine, who wants to be identified by her middle name because she fears her family could face backlash.”

This transparency is critical for readers to grasp the gravity of what sharing her story means.

Transparency is also key to the legal language surrounding abortion, as it can be difficult to understand. Instead of trying to guess or interpret the laws incorrectly, journalists should outline what they do and do not know about the legality of abortion, particularly as laws are not uniform across the United States.

As it stands, abortions are banned in at least 13 states, including Wisconsin. Eight of these states do not have exceptions for rape or incest. Ten states including California, Washington and Oregon have state laws that protect abortion. Other states have limited abortion access or are in legal limbo.

While it might feel like journalists are stuck within the confusing and politicized turmoil of the abortion issue, they do not have to be. By being aware of language and balancing fairness with truth, journalists can lean into the educational function of journalism. Schweber thinks that the post-Roe world can be an opportunity for journalists to step forward and remind the public of journalism’s purpose.

The solution to balancing fairness with truth in writing about abortion might be one that’s applicable to many complex issues: allow discourse, provide transparency and tell the whole story. 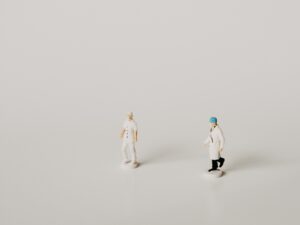