Sue Robinson has navigated media ethics in a couple of different ways.

First, as a reporter for more than a decade and now as a UW-Madison journalism professor researching how journalists use new communication technologies to report on public affairs, she’s encountered quite a few unique ethical issues. And now, she’s working to find solutions.

To that end, her first book, “Networked News, Racial Divides: How Power & Privilege Shape Progressive Communities” will be released Oct. 30 (available for pre-order here). The book examines how digital platforms enable and constrain citizens – especially those in marginalized communities – who produce and share information in the public sphere about racial achievement disparities in the K-12 education system.

More specifically, her years-long research for the book includes “drawing on network analysis of community dialogues, interviews with journalists, politicians, activists, and citizens and deep case study of five cities” to examine “the institutional, cultural, and other problematic realities of amplifying voices of all people while also recommending strategies to move forward and build trust.”

Robinson sat down to talk about media ethics and the book:

Q: What comes to mind when you consider journalism ethics?

I spend a lot of time thinking about objectivity. When you talk about objectivity, you’re talking about a main pillar of ethics. So, I spend a lot of time deconstructing what that means. [UW-Madison Prof.] Katy Culver and I wrote a piece (“When White reporters cover race: News media, objectivity and community (dis)trust”) that came out recently [that] was basically suggesting that we re-approach what we mean by ‘objectivity’ and re-think the ethical parameters of we put in place in newsrooms.

[For instance,] the whole idea that you treat everyone the same [and] as coming from the same background and having the same understandings of how information exchange happens in public spaces is unethical. So, when I talk about journalism ethics, I try to problematize that – I think about how we’ve thought about it traditionally and how is that problematic in real life.

One of the things [journalists] talk about is holding people accountable for the things they say by using their name. And so, when people don’t give their name, they can’t be credible. So, [the journalist] may use that person’s information as background, but their voice doesn’t get heard because they’re not willing to put themselves out there [by providing their name]. My argument is that not everyone can put themselves out there in the same way [because] there are power dynamics that are happening that are very real for these people, even if it means that it’s not necessarily life-threatening or freedom-threatening. There are some very real cultural, political and economical repercussions for whole groups of people and that we might reconsider how we document those voices.

[For instance], if you’re talking to the mayor – an older white man who’s used to talking to the press – there are standards to that. If he tells us something, we’re going to use his name, we’re going to put him in the paper. But, let’s say we find out about a family whose teenage son is having problems with a school district because he’s a special needs kid and he’s trying to transition to the halfway program that they have but there are a lot of problems with that program. [His parents] want to talk about those problems in hopes of making people aware that there’s an issue here in the school district, but they don’t want to go on the record because they’re afraid that people will consider that [the parents] have been problems. So, their kid is going to suffer for that [and] there may be ramifications there. They’re afraid as people of color, so that automatically adds an additional layer of complication to their lives. So, I’m suggesting that it’s an ethical obligation to differentiate between that older white male and person in power who’s used to talking to the press and someone who’s not and may have other, very real cultural reasons for not wanting to have their name in the newspaper.

Q: Do you have a name for this reconsideration of objectivity? And, how do you put it into practice?

We call it ‘active objectivity.’ The term “active objectivity”  comes from the scholarship that we are adopting. It’s an understanding of the way a journalist traditionally practices objectivity in a very passive way. [For instance, the journalist says] ‘You don’t want to give us your name? Fine, but we’re not going to necessarily be proactive about getting those voices into the newspaper if you’re not going to abide by our traditional tenets.’ Rather, we’re suggesting that the very premise of objectivity is to be balanced and fair in a way that appreciates all of the context that’s happening within that dialogue that we’re trying to get started.

Particularly when we’re talking about marginalized groups. One of my suggestions is that we talk to them about how we might amplify that voice in a way that gets the issues out there that works for them. Having those more collaborative, grassroots conversations.

Q: Your first book is coming out soon. What’s it about?

It’s called “Networked News, Racial Divides: How Power and Privilege Shape Public Discourse in Progressive Communities.” I originally wanted to document how a local community’s information ecology was being reconstituted by social media. I was particularly interested in how power dynamics affected that reconstitution, like whose voices were getting heard and whose voices were not getting heard even though we have these wonderful social media platforms that are supposed to amplify all voices.

So, that’s where we started in 2010, documenting all the media [reports] in Madison on the K-12 racial achievement racial disparities [in education] because it was a big topic in Madison and there was a lot of news around it and it was going to let me get at those power dynamics within an information ecology.

Right around that time, Madison Prep, the charter school that the Urban League of Greater Madison had proposed that was supposed to educate black boys and girls was [being considered].

So, I started documenting that conversation and started collecting actual data in September 2011 until September 2012 because that allowed me to get at the heart of the dialogue of the Madison Prep debate, Then the vote [on the creation of the school by the school board] was December 2011 and it also allowed me to get all of the post[-vote] reaction.

It happened in a lot of different phases. Four phases, which included capturing everything about that topic on social media and the news to understand how that conversation was happening, by whom and where – the public conversation. We did a bunch of network analyses around looking at who were the top influencers in that conversation and who were they talking to, who they were citing and how did information flow. So, that’s the first part of the book.

Q: What’s the next part?

We then added four other cities [Ann Arbor, Michigan; Cambridge, Massachusetts; Evanston, Illinois. and Chapel Hill, North Carolina] that were the same size as Madison and had the same K-12 racial achievement disparities. All of these cities had these huge civil-rights histories and these progressive ideologies that were steamrolling the conversations. I started realizing that it was about this progressive ideology and these long histories that these cities had that made these information flows act in the way that they were.

So, we interviewed people there and analyzed content and it all came out looking at how progressive ideology was really hijacking these conversations in a way that shut down real, true dialogue. [Residents of these cities] were all very loquacious about these issues. There were a lot of forums. There was a lot of media and a lot of blogs and a lot of Facebook posts about the various [educational] achievement disparities and the different proposals they were trying do or racial incidents in the schools.

It’s for white progressives. And I say that in the book. Because I’m a white progressive and the book ended up being as much of a personal journey as it was a detached, research journey. I started having to do all of this social justice training myself to understand what I was looking at. In the course of that, I realized how many times I was stumbling, how many assumptions I was making, both in my position as a researcher and as someone in the power hierarchy and just as a citizen.

I started realizing, ‘Oh, I have a lot of work to do myself and my own racial journey to go on’ that I didn’t even know existed. I didn’t even know there was such a thing as ‘my race,’ in terms of a racial journey. That, I felt like, was a metaphor for what I thought these progressive cities, which were dominated by several white power hierarchies needed to go through as well. It’s sort of like a ‘Here’s how we can do that and here’s what to expect on that path.’

The last chapter is really dedicated to recommendations. I interviewed 10 international experts on how to have these conversations, how to have these conversations with yourself. But also how to interact in these communities with those conversations. Thinking about your progressive identity. Because the minute you start talking about [kindergarten] through 12th [grade] school systems we built to be equitable in a progressive understanding – all of these cities [we studied] have always been progressive and they have built these systems with the idea that they would be reformed from what the rest of the country would be like. We were supposed to have solved these problems and yet these are the places that have had the worst disparities in the country.

So, how do we have that conversation when you’re really talking about your progressive identity?

Q: Where do you see this book having the most value?

The biggest part of all of this for me was turning all of the findings into actionable white papers. It’s all centered around community dialogue and how can we talk about this in a productive way that doesn’t keep us just going around in circles.

Q: What were the big ethical hurdles?

It’s about public communication so journalism is a huge part of that, but it’s all the systems, all the institutions, the institution of education and politics, particularly progressive politics.

So, whenever you’re talking about institutions like those that have long histories of oppression, you’re going to be dealing with trying to work to change [and] to disrupt, [which] means coming up against ethical policies that have been enacted for long decades.

These are policies that have been deliberated upon for decades and decades. So, what I’m suggesting is that maybe those ethical principles are not being as aware or as accommodating to groups of people who have been oppressed within those systems. 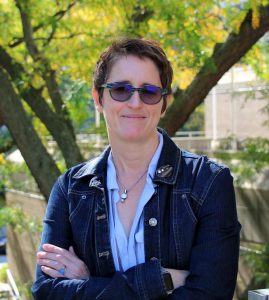