Mark Sappenfield, editor at the The Christian Science Monitor, and Christa Case Bryant, the Monitor’s heartland correspondent, said journalists need to reconsider objectivity as a goal of journalism without falling into partisan journalism.

“The goal of all nonpartisan journalism is the get the fullest picture possible,” Sappenfield said.

“I don’t think it’s possible to ever have one article that is totally objective, “ she said.

Sappenfield and Bryant discussed nonpartisan journalism Saturday in a community discussion held at the Concord House on the University of Wisconsin-Madison campus, as part of a national conversation that challenges the idea that journalists can be completely objective.

Bryant said the decisions that go into reporting and writing any one story are complex and numerous.

“Whose quote is going to lead the article? And which one [comes at the end and] is that zinger quote that the reader is left with? Are you going to use adverbs and adjectives? And if you do, are they going to be sort of neutral-ish or are they going to be one side or the other? And even if you think it’s neutral, is someone else going to read it that way?” She pointed to articles she wrote years ago about SodaStream, an Israeli company that then operated a factory inside a West Bank settlement.

“There’s just no way, with a human language, to do something that’s mechanically objective,” she said.

Instead, she said, journalists can be deliberative and thoughtful about the issues and angles they choose to report.

“Imagine that one of your readers from the left and one from the right comes along with you to do the reporting. And then, when you put the article together, will they say ‘Yes, that is representative of what I heard in the interviews.’ That’s what I feel is the best we can accomplish at this point.”

Sappenfield said recognizing the difficulty or impossibility of objectivity does not mean abandoning facts or one-sided reporting.

“You have to go with courage where the facts lead you … but you also have to genuinely embrace and respect everyone and seek out their viewpoints,” Sappenfield told the small crowd. “In other words, you’re not going to arrive at the truth and true facts, if you’re not going to just pound away at one side. You have to look at it from all other perspectives – and then you’re going to arrive at the best truth.”

Journalists can serve the public audience by telling multiple perspectives and interrogating the facts.

“Like in science, once you think you’ve proven something, you then try to disprove it from all the different sides. So, to me, the job of the journalist is to go where the facts lead them and then try and disprove that from as many different sides as possible and that lets you center in on what you think is the actual issue.”

Sappenfield that judging the fairness and accuracy of journalism should be at by examining a body of work rather than individual stories.

“In order to tell a story, you have to tell it from one side … but I would be constantly telling myself that I don’t want to tell the story just from that one perspective. What are some other angles can I look at this conflict from?”

Therefore, the importance of following up on issues and new developments is paramount, he said.

“The fairness comes in the totality of the work, not in the individual story.” 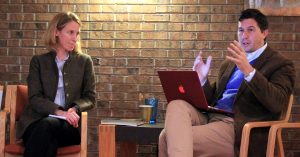