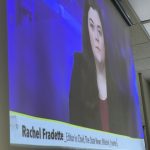 It takes a toll.

At first, you try to ignore it.

But then it comes at you so quickly you cannot.

When allegations first surfaced that Larry Nassar had sexually assaulted women here at Michigan State University and the USA Gymnastics team, it was a stunning revelation.

We didn’t talk about it much at first. It was seemingly another crazy story in our newsfeed, the kind we often seem numb to now.

Student media covered it, but with no understanding of the breadth and depth of what was to come.

It was also a difficult story to cover.

Investigators had little to offer.

Getting campus reaction seemed trite, so aside from a few stories here and there, the story didn’t gain that much traction at first.

In early December, before the end of the fall semester, Nassar struck the first of several plea deals and was sentenced to 60 years in federal prison on child pornography charges.

The case started to heat up. Our students covered the sentencing—but that led into finals week and off to break they went.

With the start of a new semester, fresh faces came to our journalism classes. Many are learning to be journalists for the first time. Others are delving into advanced storytelling. 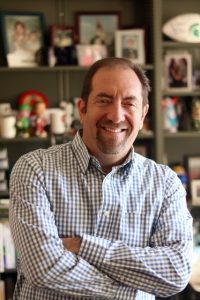 As a broadcast journalism instructor, my students were a month away from their first newscast, but Nassar was back in court with another plea, this time a sentencing for sexually assaulting young women.

In a system where victims are rarely identified, a new paradigm emerged. More than a 150 victims came forward, one-by-one, to tell their emotionally charged story in open court, confronting the man who had ruined their lives and took away their innocence.

We discussed the case briefly in class, but because the newscast was a month away, covering this testimony would seem dated by then.

So I ignored it.

But here I was, with the largest story to ever hit my university, my alma mater, my employer, and I was ignoring it.

My thought was to carry on, business as usual. We had a job to do: Educate students and prepare them for life after college. By ignoring it, I hoped it would take their minds off of it. Class would serve as a distraction from what was happening.

But it takes a toll.

Students tell me that they were distracted. Many spending every available minute with necks bent to their iPhones for the latest news.

It triggered emotional responses for those who have experienced sexual assault or harassment.

I realize now that deep down I was in denial. I didn’t want to cover a story that affected our university so greatly. It also meant extra work. This would not be an easy story to do. It starts to overwhelm you.

As the hearing went on, the pit in my stomach grew.

This sentencing went on for a week with local, state and national media focused right here in Lansing, Michigan.

After the third day, I called my teaching colleague Mike Castellucci.

“This is the biggest story you and I will probably ever see at this university,” I told him. “We are doing a disservice to our students, the community and our j-school by not covering this.”

We couldn’t ignore this anymore.

During the court proceedings, peripheral stories start to emerge.

The university president came under fire with calls for her to resign. The Board of Trustees pledged full support of her; the tension on campus escalated with protests and marches. ESPN published a scathing report. It seemed every hour a new story broke.

How would we approach all of this with our students? 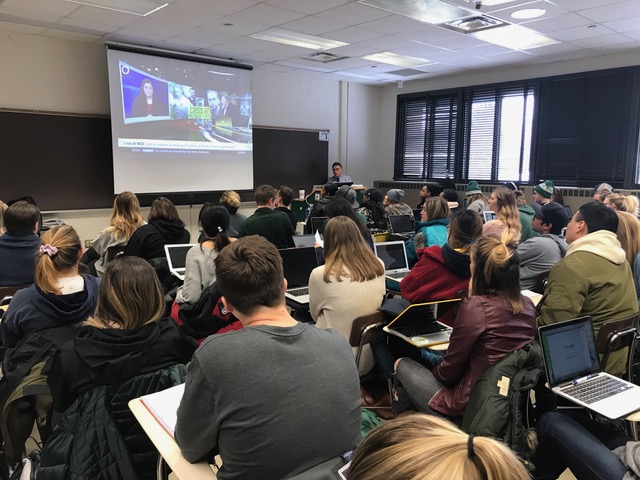 Gould’s class watches as classmate and State News editor Rachel Fradette does a live interview on a national network. Photo by Bob Gould.

The State News, the student independent voice newspaper, was doing a great job of staying on top of the story, but it was not as easy for students in our classes.

After hanging up the phone with Mike, we agreed how we’d approach this in class the next day. We started with a discussion and asked questions.

“How are you feeling?”

“What is the emotional temperature?”

“Are you ready to tackle this case as journalists?”

Perhaps not surprisingly, the class completely absorbed themselves into the discussion. If you are an educator, you understand that feeling when you hit on something and you know everyone is paying attention. Phones are off. Laptops are closed. Eyes are tightly focused on you as you facilitate the conversation. 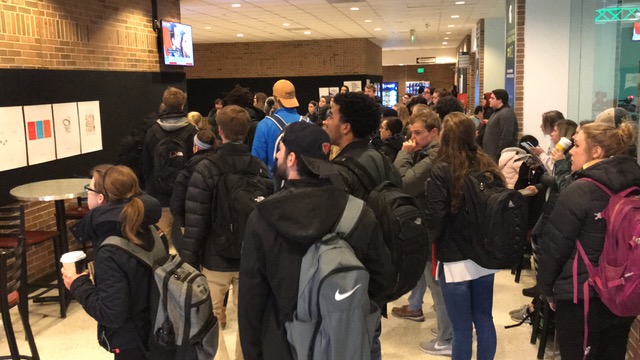 They wanted to talk and they jumped at the opportunity to tell the story.

We went around the room for story ideas. We decided our first newscast would be a special edition devoted entirely to this case.

The weeklong sentencing came to an end, just as class began for the day. Students gathered quietly staring at CNN’s projected images in our newsroom and hallways waiting anxiously for judge Rosemarie Aquilina to seal his fate.

Within the week, the president and athletic director resigned.

The board appointed an unpopular choice for interim president.

The investigation turned to the football and basketball programs.

Another sentencing – this time in another county – and more victim testimony, including a father, full of emotional rage, who lunged to try and attack Nassar.

Over the course of the hearings, 265 women made statements. More protests, and more calls for the board to resign.

There is certainly no lack of stories to be told.

But it takes a toll.

The entire campus community is struggling to deal with all of this.

“We don’t get to mourn our school like everyone else does because you have a job to do. We must separate ourselves,” said Rachel Fradette, State News editor-in-chief.

Everywhere you go, someone will ask, “What is it like on campus right now?”

When you see other faculty in the hallways, you can’t help but discuss the latest news.

One student told me it’s going to be difficult to graduate in May, leaving the university during all this turmoil.

“The reporting is doing something very important, but at the same time it’s hard to see the school you care about collapse. There’s some guilt to knowing we had a hand in that.”

It takes a toll.

But we can’t let our students down. They deserve that much from us.

Bob Gould is a 1990 graduate of Michigan State University and is now in his 11th year teaching broadcast reporting and media law & ethics in the MSU School of Journalism after working 17 years in a television newsroom. He has been honored with more than 40 industry awards, most recently the “Robin F. Garland National Educator Award” from the National Press Photographers Association.

Read what Gould learned from covering a case that was so close to home with student journalists.