Too many young journalists go into high-risk areas without proper safety training, without identifying mentors and without a true plan of what they’re going to do when they arrive, said Bruce Shapiro, director of the Dart Center for Journalism and Trauma.

Shapiro’s message to those young journalists is simple:

Shapiro was speaking Feb. 9 on a panel at “Cultures in Conflict: Navigating Culture Difference In International Human Rights Reporting,” a conference hosted by the University of Wisconsin-Madison’s School of Journalism and Mass Communication and The Institute for Regional and International Studies. The Center for Journalism Ethics was a sponsor of the event.

Shapiro, Sheila Coronel, a journalist and co-founder of the Philippines Center for Investigative Journalism and Adriana Fernandez, an independent photojournalist, said journalist safety is an ethical obligation of media organizations and journalists.

In recent years, all three panelists have seen growth in the discussion of journalist safety.

“One of the greatest innovations in journalism over the last decade has been the rise of training that encourages all of us to think strategically and critically and to learn from every close call to improve our own practice,” Shapiro said. “Because we’re not doing our job as journalists if we’re not keeping each other safe.”

According to Shapiro and Coronel, the rise in safety concerns has created an ethical obligation for employers to keep their employees safe.

Coronel observed that threats to women specifically are actually worse in 2018 than they have been previously due to the addition of social media harassment.

This can have a detrimental effect on many female journalists because women may decline assignments for fear of being harassed or threatened.

“For the most part whether its physical, online or sexual harassment, women don’t complain or inform their bosses for fear that they’ll be taken off of their beats or lose their jobs,” she said.

Shapiro noted that the ACOS Alliance, an organization that features a collaboration between news organizations, press freedoms, NGOs and journalists, is just one group committed to taking practical steps to improve the safety of freelance journalists in the field.

Coronel also said that journalists have an ethical responsibility in their reporting to stick closely with the facts, use as neutral language as possible and produce solid work to try and keep themselves safe in high-risk areas.

“Ethical news practice is also highly associated with psychological resilience and safety,” Shapiro said. “If you can look yourself in the mirror at the end of the day, and know why you are there, then no matter how awful the story you’re covering is, if you know why you’re there, your news judgments will be better, your safety judgments are going to be better.” 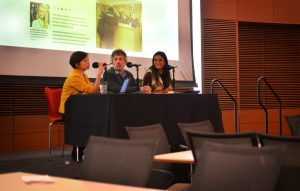