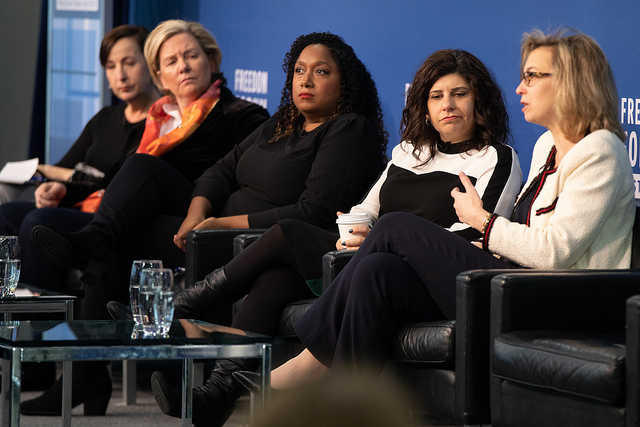 On Jan. 15, 2019, the Freedom Forum Institute’s PowerShift Project hosted the PowerShift Summit 2.0 at the Newseum. The summit gathered invited leaders across journalism and the media industry to focus on #MeToo and the media one year later. (Summit photos courtesy of the Newseum)

In October 2017 the New York Times published a story detailing decades of alleged abuse by film executive Harvey Weinstein. The story marked a watershed, resulting in new stories of sexual harassment and workplace misconduct that spanned industries, including media organizations and newsrooms.

“There was a tremendous wave of press coverage of sexual misconduct at the top of many organizations, not just media,” said Cathy Trost, senior vice president and executive director of the Freedom Forum Institute, the education and outreach arm of the Freedom Forum and Newseum. “We got interested in how we could convene around these issues.”

“At the Summit we came away knowing that our tolerance in media organizations, not just of harassment and misconduct, but of discrimination and corrosive behavior, had really left a trail of damage in the news industry,” Trost said.

It was clear that HR practices in their current format had failed and needed changing. 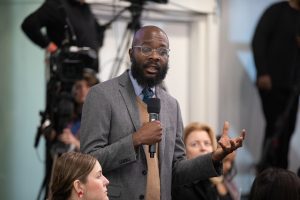 “Everything that happened, happened on our watch,” Traci Schweikert, vice president for HR at Politico, said at the 2019 summit. “We didn’t do all the things that we needed to do. From an HR standpoint, we did what was legally required.”

Less clear, however, was how to repair the damage and prevent future misconduct and harassment.

“This is a moment when there isn’t a clear playbook, and we’re trying to figure out as a company what do we do to address this?” NPR President of Operations Loren Mayor said in 2018.

As allegations poured in, news organizations and media outlets began to look internally at their own practices and address their own issues. Many found that the issue was more complex than they’d initially thought.

“Sexual harassment was just the tip of the iceberg,” Mayor said in 2018. “It opened up all of these broader issues about power dynamics, inequalities in the organization, racial issues, it ran very deep.”

The complex nature of these issues meant that traditional online harassment training was not doing enough to prepare employees.

“That kind of check-the-box, online training really doesn’t create the strength that an organization needs to transform its culture,” Trost said.

According to Trost, after the first PowerShift Summit it was clear that there was a desire for a new approach to creating and maintaining a positive work environment.

The goal of the training is to “teach ways to be both proactive and reactive, to not just illegal harassment and misconduct, but to the kind of behaviors that we know now can lead to it,” Trost said.

News organizations send representatives to the workshop, where they practice teaching what they learn, so they can return to their own organizations to teach others. According to Trost, there have been four trainings and about 70 people have attended.

At NPR, Mayor began what she called “listening sessions,” where she met with groups of 20 people or fewer to hear what was on employees’ minds. Staff members came forward and requested a peer-to-peer support group for people who had concerns about harassment and broader workplace issues.

According to Sara Goo, managing editor at NPR, educating and training people throughout the company provided a new resource for them.

“We function to both guide people who have harassment concerns, and also as a kind of heatmap of the company to monitor when we see issues that really need to be addressed,” she said. 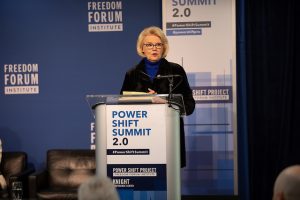 Jill Geisler at the PowerShift Summit 2.0

NPR worked with its legal and HR departments, as well as a consultant, to make sure their team was educated and well-prepared, according to Goo.

“It’s been a really incredible effort to watch,” Mayor said. “We’ve created something of a network of people around the company who are trusted and are an open door.”

Politico has looked to focus more on the environment they want,  rather than just the basic legal requirements, according to Schweikert. This has meant going above legally required online training.

Schweikert said they have begun having conversations that go beyond textbook policies, and instead focus on what things can look like on a day-to-day basis.

“As part of new employee orientation, we’re not just talking about the policies,” she said. “We’re talking about, ‘this is Politico, this is the culture we want.’ We have conversations about what that might look like. And if you are met with a situation where you don’t see that, who are the people you can go to.”

While the industry continues to make changes, Trost said eventually workplace integrity will become the culture rather than the goal.

“There’s enough organizations like ours,” she said. “And enough really good people in the news industry that see this not just as something they have to do to prevent illegal behavior, but as a better pathway to stronger journalism. And that’s the bottom line.”

Our spring conference “What #MeToo Means for Gender, Power & Ethical Journalism” will take place on Friday, April 26, in Madison, Wisconsin. More information and registration can be found here. 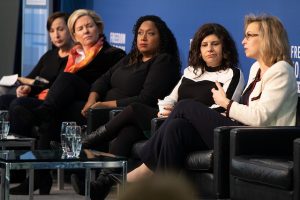