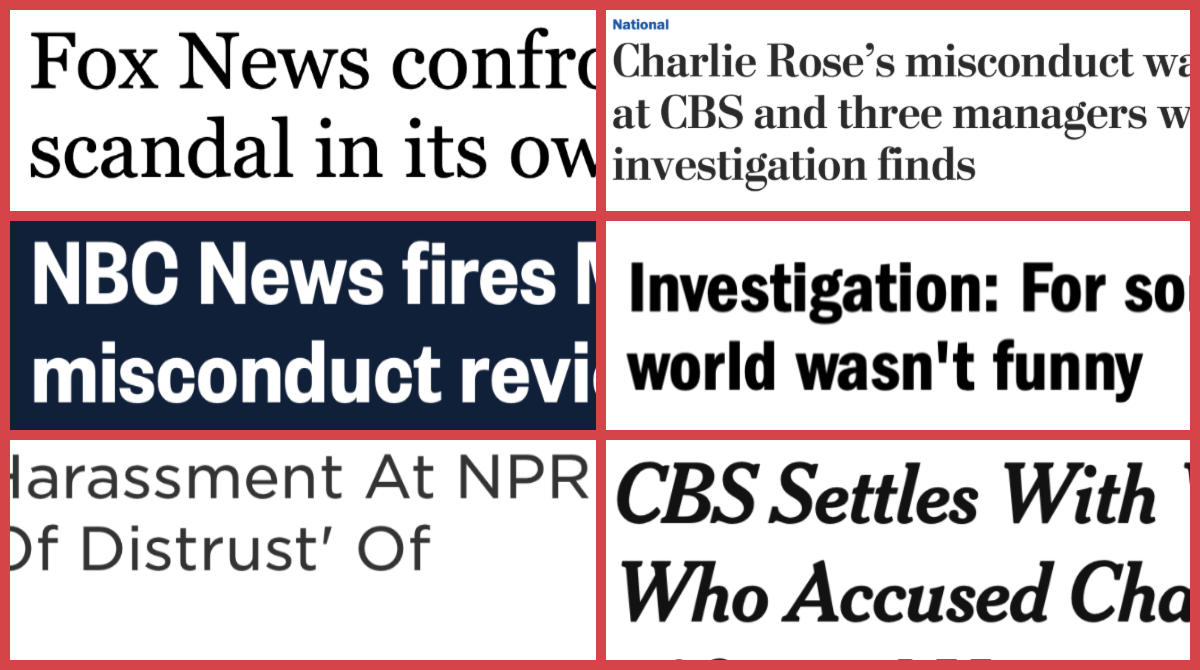 As #MeToo accusations mounted against a number of high-profile media figures in 2017 and 2018, organizations faced questions of how sexual harassment and assault could fester unaddressed. But for individual journalists, particularly those who cover news media, questions focused on how they could cover these cases ethically, with the right balance of truth-telling, transparency and respect for privacy.

Margaret Sullivan, a media columnist for the Washington Post and former public editor at the New York Times, said there is no set guideline for how to cover a harassment scandal once news of it breaks. According to Sullivan, quality news outlets try to be transparent and honest with their audience about what has happened within their own organization.

When it comes to weighing the need to be transparent with news audiences against the privacy of those involved, Sullivan says reporting decisions should not be driven by wanting to protect the organization’s reputation, since this isn’t a concern when reporting on another organization.

“We’re not thinking ‘Oh dear, is this going to hurt NBC’s reputation?’ No, we’re just trying to tell the truth, and we should be doing that in every case,” Sullivan said.

Yet Paul Farhi, a media reporter at the Washington Post, says that a news organization is both a news organization and a company, and that these two roles might come into conflict when it comes to a situation such as covering its own harassment scandal.

“We’re all in favor of transparency, but it’s not quite so simple, particularly when it comes to a company talking about an employee,” Farhi said. Companies also have obligations to their employees and their privacy.

Farhi, who has covered numerous harassment scandals—both at the Washington Post and within other news organizations—also says accusations do not necessarily turn into a story.

According to Farhi, elements of sexual harassment and assault allegations make them particularly difficult to report. These include the specificity of the accusations, corroborating evidence (such as the accuser discussing incidents with another person) and time lapsed between incidents and accusations.

Following Garrison Keillor’s abrupt firing from Minnesota Public Radio in November 2017, an investigative team of reporters at MPR released a story in January 2018 on sexual harassment allegations against Keillor.

The stream of reporting following the initial piece not only discussed Keillor’s alleged misconduct, but also detailed the work being done by MPR to cover up the scandal.

Eric Ringham, an arts editor at MPR, was the editor of a team of journalists covering the Garrison Keillor scandal.

“Even though it was a complication that the scandal was in-house, it was also a big part of our motivation because we had a strong sense that our readers and listeners would be interested in knowing a lot more than our employer was letting on,” Ringham said.

Ringham believes that news organizations have to be willing to treat their own the same way they have treated others.

“It was troubling to me as a journalist because I work for a company that over decades had put Garrison in the marketplace as a star, promoted his career and profited handsomely from his career and from his popularity,” Ringham said.  “To suddenly make him a non-person without any kind of a meaningful explanation as to why was doing a disservice.”

When it came to investigating the claims and reporting on Keillor, MPR’s team of journalists put themselves on the same playing field as media organizations that did not work for MPR, according to Ringham.

They did not want to use any of their insider access from working at MPR to get an advantage on the story. Instead of attending staff meetings that discussed the current state of the Keillor allegations, they avoided the meetings and interviewed their peers afterward.

Ringham admitted that there are still some strained relationships in the office following their coverage of Keillor.

“It’s a little awkward because some of them were offended—they thought we were being somehow disloyal,” Ringham said.

While MPR had attempted to hide information about the Keillor allegations from the public for some time, Ringham was gratified to see that the organization respected their investigation once the team began reporting.

“We were working with the knowledge that we at least believed there was a firewall that separated the newsroom from the business interests of MPR, and that we were independent and would be free to work independently,” Ringham said.

“I think it was an open question how firm that firewall would prove to be as this story played itself out. I’m gratified to say that the firewall held.”

At National Public Radio, there is a clear policy and protocol on how to cover news involving NPR in a significant way, said David Folkenflik, a media reporter at NPR and host and editor of “On Point.”

David Folkenflik covered Michael Oreskes, the now former senior vice president of news and editorial director at NPR, when the Washington Post reported on sexual harassment allegations against him.

Folkenflik said he had previously looked into an allegation against Oreskes a year-and-a-half before the Washington Post published the first story about it in October 2017.

At that time, Folkenflik couldn’t get a source to go on record and couldn’t establish a pattern of behavior. But Oreskes was rebuked for his behavior.

After the Washington Post broke the story, NPR knew it had to be covered—not just because it was getting coverage from other organizations—but because they had reason to believe there was a pattern of behavior that had to be investigated.

“We thought we were going to own this story even though we weren’t the first ones to write a public story about it,” Folkenflik said.

Covering such an important figure at the organization added an extra level of discomfort.

“This was something that tore people up,” Folkenflik said. “It really affected the chemistry of the newsroom in a significant way.”

This was not the first time Folkenflik had covered stories of this nature. He has covered sexual harassment and sexual assault allegations at Fox News, NBC and CBS.

But he recognizes the necessity of covering these stories for the public.

“Even in a time of crisis, we are going to fulfill our mission. Even when it’s most uncomfortable for ourselves,” Folkenflik said. “These are issues that are serious and have to be exposed. There is behavior that has to be held accountable.”

Moving forward in the era of #MeToo

“It really is a different era,” Farhi said. “I think this whole #MeToo movement has created an entire set of variables that we didn’t deal with before because very few people reported on sexual harassment other than Bill O’Reilly and Fox.”

Farhi points out that the same journalistic standards should still always apply. “You try to get as much information as you can while respecting the privacy of individuals and dealing with the sensitivities of people making accusations like this,” Farhi said.

Falling back on the usual journalistic fundamentals will guide reporters, Farhi said—be fair, be accurate, be honest and be truthful about how you report.

Sullivan believes that journalists need to use the same ethical standards to report on themselves as they would on other industries.

“I’m hoping to see fairness, that you would cover yourself the way you would cover another entity, whether it’s a news organization or Congress or the Metropolitan Opera,” Sullivan said.

Folkenflik said when journalists are putting out a story about their employer, they have to dig into what happened and live their journalistic values.

“We’re major institutions, and we help people shape their views of the world. We need to get it right.”

For information on the conference hosted by the Center for Journalism Ethics on “What #MeToo Means for Gender, Power & Ethical Journalism,” on April 26, see this summary. 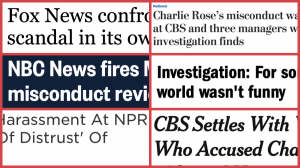