Lewis Raven Wallace is an independent journalist based in Durham, North Carolina, the author of “The View From Somewhere: Undoing the Myth of Journalistic Objectivity,” and a host and producer of a podcast of the same name.

In “The View from Somewhere,” Wallace explores how the journalistic concept of objectivity has been used to silence marginalized writers and reinforce racism, sexism and transphobia.

In his examination of social movements such as Black Lives Matter, Wallace argues against claiming that journalists are without bias in favor of a more nuanced understanding of journalists’ differing worldviews and the institutional power of the news industry.

Wallace is also the co-founder and the national program director for Press On, a southern journalism collective that supports “journalism in service of liberation.” He previously worked for public radio’s Marketplace in the New York bureau and was the economics reporter and managing editor at WYSO Public Radio in Yellow Springs, Ohio.

In a recent interview, Wallace spoke with the Center for Journalism Ethics about being trans in the news industry, what he means by the “view from somewhere,” building trust with news consumers and the importance of validating the perspectives of marginalized communities.

What has your experience as a trans person working in public media looked like?

I’ve been out for almost 20 years and the way I came into trans identity … there was absolutely no choice but to be an activist and an advocate for yourself. It’s hard to describe how strange of an experience it was to be in a space where my identity would be depoliticized or people would treat it as apolitical. For me, politics of gender and race and identity are who I am and have always been so intertwined. There were countless times that I didn’t feel comfortable bringing myself into those spaces.

What are the ethical standards that journalists should consider? Are they changing?

I’ve talked to a lot of people, mostly people of color, queer and trans people who have dropped out of a journalism program because of how uncomfortable they felt with the vision being presented. I think it can have a direct effect on who feels like they can become a journalist. And similarly, I have also talked to people who are still studying journalism, but who think it is not nuanced enough for the situation that we’re dealing with in media today. The standards are different, especially in online media. And it makes sense. A lot of jobs in media at this point are for openly un-objective outlets. Part of my argument is that, that’s OK. There are good reasons why the standards are different. There’s sort of an old school of mostly male, white, older journalists who feel the standards are chipping away. And I’m sure that there’s a grain of truth in that, but they’re clinging to jaded notions of objectivity that emerged when almost exclusively white men were in newsrooms. Keeping younger people engaged with the idea of what journalism is and could be is something that I’ve witnessed since the book came out. I’ve talked with a good number of journalists and journalism students who were just really relieved. It’s been reaffirming to me that people can see their worldviews represented.

What inspired The View from Somewhere?

“The View from Nowhere” is the title of a philosophy book by Thomas Navel that came out in the ’70s. I read that book and wanted to ground my studies in a real and honest consideration of the very concept of objectivity. There’s a central philosophical question about objectivity and whether there are truths in the world that we can all agree on. That idea is up for debate and has been for decades. I also wanted to reference Jay Rosen, who has integrated the concept of a “view from nowhere” into discussions about journalism and has pointed out the impossibility and hypocrisy of journalism outlets claiming to have a view from nowhere. I just appreciate in general that many decades of scholarly study have helped us understand what can happen when we problematize the very idea of an objective viewpoint. I like the idea of “a view from somewhere,” being a very honest take. To say, “Here’s where I’m standing and now I’m going to tell my story and what I can see and verify factually.”

What should journalists do to ensure that the public can trust the information being reported?

I think some journalism organizations are already doing a great job at really digging into transparency and showing their work and their process when it comes to verifying information and even the possibility of being wrong. There’s a less combative relationship. I think the more transparent we can be about our process and the more we are willing to listen to healthy constructive criticism, that can help us interact with our audiences. I think we need to listen to criticism and take it seriously. I also think we need to take seriously the portion of the population that doesn’t care about the news that we’re putting out and take seriously their reasons why. Over decades and generations, if you don’t see yourself represented or talking about the issues that matter to you in a way that is relatable, of course you’re going to tune out. And that conscious divestment isn’t the only influence on the failing business models for journalism. Not at all. A lot of that is about corporate consolidation and social media platforms. Some of the people who are underrepresented in our political systems also have good reason to distrust and divest from news outlets. Taking those voices and the criticisms of those communities very, very seriously, is another path to rebuilding trust. I think this idea that we should just appear objective is a very ill-informed way of thinking about how people develop trust. Trust is relational, it takes time.

What are the challenges journalists from marginalized communities face when creating their own news?

The challenges are all structural. But the funny thing is, marginalized people will always find a way to tell our stories. One way or another, we’re often doing it without the resources that it might take to do it as well as it could be done or as deeply. A lot of frustration for me was working within the public media system and desperately wanting these national news outlets to put those resources into the kinds of stories that could connect with the underserved populations. It’s about structural access to resources. Which is why a lot of people are working as journalists trying to land a job in mainstream media. Having weeks or months to work on feature or investigative stories as a freelancer or independent outlet is extremely hard. Once those resources are tapped into, who has access to them?

What can happen when a journalist becomes the news? Can this affect the news coverage of a sensitive issue in real time?

When journalists become the news, it can be for a variety of different reasons. But it’s complex. To not have your identity and body politicized or under attack is a form of  privilege. However, it can be a double standard for journalists who are constant targets because of their identity. For example, as I include in the book, I was fascinated by the New York media activists and queer media activists who reported on the gay community during the ’80s. Over time, it made it possible for journalists who were gay, to cover the AIDS crisis and make it visible. It was almost like a responsibility to do it justice. I think that kind of collective journalism is what matters entirely. It takes the presence of voices in the newsrooms, but also sometimes, louder voices outside of them.

What do you hope audiences will take from The View From Somewhere? What does it mean to advocate for your work?

For the podcast episode that recently came out as part of our Kickstarter campaign, we talk about the “View from Somewhere” as an antidote to hopelessness. I think my collaborator Romana Martinez and I really want people to feel connected to these histories of journalists who have resisted and who stood up for justice. We want people to feel less hopeless about what’s possible. We don’t want people to give up on journalism because of the structural issues. We want people to take away that journalism still matters. It is a part of building toward collective freedom and liberation that is connected with history. I think it is a powerful way to be reminded of hope and possibility, that being part of change is possible. 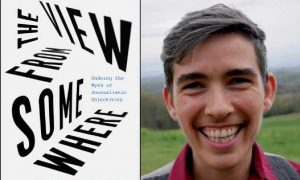