A shift is underway in how journalists cover episodes of gun violence and other forms of trauma in the United States. New ethical considerations are redefining the role journalists play in telling these stories and increasing the amount of community-based coverage, with journalists often building trust by reporting on the long-term effects of violence in their own communities.

“I don’t think it’s a hopeless picture,” Bruce Shapiro, executive director of the Dart Center for Journalism and Trauma, says. “I think there actually is a lot of innovation going on in this area.”

According to Shapiro, the question of which types of gun violence get covered is something that has changed over time, with journalists now placing greater focus on historically under-covered types of gun violence such as suicide, an effort that gives people a more accurate picture of where the biggest threats lie.

“We kind of define as news the thing that seems unusual, notable, new, right? That’s what makes it news,” Shapiro says. “This leads journalism too often to focus on the most spectacular kinds of carnage and ignore or pay insufficient attention to the most common and ordinary threats.”

According to Shapiro, the increase in the number of episodes of gun violence in the U.S. is partly responsible for coverage that favors larger, more horrific acts of violence. According to data gathered from Gun Violence Archive, a nonprofit that tracks shootings, at least 15,292 people were fatally shot in the U.S. in 2019. This figure excludes suicides. Also driving the coverage is the increasingly polarized debate around gun violence and about which measures, if any, the government should take to prevent it.

And yet the way journalists see their role in covering these horrific acts of violence is also changing.

“There are a lot of reporters, including at mainstream media outlets, that have been trying over the course of the last five or 10 years to do a different kind of reporting on gun violence,” Shapiro says, “to do the kind of reporting that focuses on the community impact of gun violence beyond these spectacular breaking news interruption kinds of stories.”

Among those reporters is John Woodrow Cox, an enterprise reporter at the Washington Post, who has written several articles about gun violence that focus on community effects.

In one article titled “How many children are affected by school gun violence in America?”, Cox argues that death toll figures that follow episodes of gun violence fail to capture the long lasting effects on those who witness such carnage and survive. “Beginning with Columbine in 1999,” Cox writes, “more than 187,000 students attending at least 193 primary or secondary schools have experienced a shooting on campus during school hours, according to a year-long Washington Post analysis.”

“Many are never the same,” Cox adds.

Cox’s reporting provides readers with information that can change behavior or even inspire action. Cox goes beyond reporting the numbers, succeeding in helping the public more fully understand the issue. This type of reporting helps policymakers and community leaders better understand how they can support and heal the community following an act of violence.

Shapiro says that reporting on episodes of gun violence has too often focused solely on nurturing sources within the criminal justice system, such as police officers.

“If our sources are only people from the criminal justice system, then we’re missing half the story,” Shapiro says. “You need to have sources that are dealing with the impact of gun violence every single day. And if you’re talking to those sources patiently over time, that will change what you think the story about gun violence really is.”

Another reporter engaging in this sort of community-based reporting is Peter Nickeas, a general assignment reporter for the Chicago Tribune, who covered violence and trauma for the Tribune’s breaking news desk for seven years.

“Over the Fourth of July holiday, Felix Kombwa brought the children he mentors to a festival where a law-enforcement exhibit allowed visitors to sit in a squad car, try on police gear and chat with officers,” Nickeas writes. “But the fireworks, the presence of the officers and the sight of their weapons all scared the children, Kombwa said. They mistook the fireworks for gunshots and thought the guns, though holstered, were ‘too loud.’”

The kind of reporting that Cox and Nickeas are doing is notable because it defines the role of journalists as more than merely news gatherers and disseminators. This type of reporting asks readers to see journalists as fellow members of the community and has the potential to build trust.

Another example of innovative reporting on gun violence is The Trace, an independent, nonprofit news organization dedicated to expanding coverage of guns in the U.S. The Trace has produced several stories that represent a wide range of angles that often go uncovered.

In a recent article titled “When Protesters Carry Guns, Does It Impede Others’ Free Speech?”, reporter Olivia Li recounts how a January rally in Richmond, Va. ( in which pro-gun activists were protesting a series of gun reform bills going through the state General Assembly) subsequently prevented a group of counter protesters from attending, fearing violence. Many of the pro-gun activists in attendance were utilizing Virginia’s open carry law.

“Many of them were armed. The specter of a massive open carry demonstration was difficult for anyone to ignore,” Li writes, “but the day was also significant because of the people not in attendance outside the state Capitol grounds.”

This powerful lead offers a unique angle in its reporting on gun violence, focusing on the implications on freedom of assembly, a key pillar of democratic and civic life in the U.S. Li offers readers a look at the free speech implications resulting from open carry demonstrations and the potentially chilling effects on speech, and by extension, on democracy.

Li asks the reader to consider a distinct effect of the increased polarization around the gun debate and how that affects the communities in which people live.

These are just a few examples of individual reporters and news organizations engaging in a more thoughtful type of journalism—reporting that is grounded not only in informing people where the threats are but in uncovering the many ways communities are affected by acts of violence. 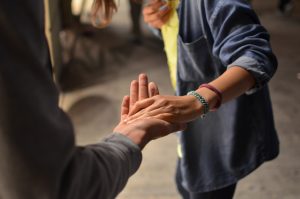