About five years ago, veteran meteorologist Bob Lindmeier was pondering the disconnect between the science of climate change and the public’s understanding of it. Around the same time, he celebrated the birth of his first grandchild, a milestone that helped push him to change his approach to the weather segments he’d been doing, since 1980, at WKOW-TV in Madison, Wisconsin.

“That’s when my focus started to shift not just to my lifetime, but their lifetime, and what the climate could very well be like when they’re adults,” says Lindmeier, who began tying climate change science into his weather segments.

For a long time, weather forecasters were hesitant to discuss climate change, and some were even denying the science. According to Bud Ward, editor of Yale Climate Connections, the conversation changed about 10 years ago when a front page story ran in the New York Times.

Ward says the article was “about broadcast meteorologists who were basically key potential educators and informers or communicators on climate change science, but that they weren’t doing a very good job.”

Many factors have contributed to this lag in climate coverage, including lack of time or comfort on the part of broadcasters, concerns about viewership and management priorities. But according to Ward and others, broadcast meteorologists and weather forecasters have an important role to play in delivering accurate information about climate change.

As one of the more trusted broadcasters, meteorologists and forecasters need to consider their influence over viewers and how they can best use this connection to inform the public about climate change and its  impact on local weather.

Part of the lag in coverage can be attributed to management and viewership issues, according to Lindmeier.

“There are some stations’ management that say, ‘We don’t want you to speak out about it,’” Lindmeier says. “Some of it is because they’re part of a conservative station group; they just have conservative leanings.”

Lindmeier also says that if a meteorologist or weather forecaster is new to the industry and trying to establish a loyal following, they may be more hesitant to discuss the issue. He reports losing some “long-term” viewers due to his broadcasting, but he has been willing to sacrifice that because “the upside of what [he is] doing…weighs so much more than the downside.”

While some broadcasters don’t have the knowledge to speak comfortably about climate change, the one-minute nature of a weather forecast may also be a barrier. According to Ward, the problem of brevity is compounded by the differential scopes between weather and climate: short-term and long-term, respectively.

Ward also cites the “media revolution” – the widespread migration from print to digital news – as part of the problem. Changes in funding have translated to lower staff numbers and not as many science reporters staffed to work alongside meteorologists. Justin Gillis, a columnist for the New York Times and former lead writer on climate science, also believes this to be part of the problem.

And yet, even with these barriers, Gillis does not let forecasters off the hook.

“They are dealing with the weather on a daily basis and the problem people were observing and identifying is you [have] clear-cut events linked to climate change,” Gillis says. “It was not only not being mentioned by the weather forecasters, it was often kind of outright denial.”

Fortunately, there has been improvement over the past decade. According to Jeff Berardelli, meteorologist and climate specialist at CBS News, where climate change is concerned, reality has caught up. “I’d say the main reason is that climate change impacts are accelerating,” Berardelli says. “It is no longer far off in the future.”

The role of weather forecasters in communicating science

Berardelli says weather forecasters have a responsibility to use their knowledge of climate change to inform the public.

“It is our duty to illuminate the issue with science, to educate the public and help viewers decipher what is true. It is both a science, and more importantly, a civic duty,” Berardelli says.

For much of the public, weather forecasters and meteorologists may also be their main point of contact with science.

“What I really emphasize to my viewers, or when I give a talk, is number one, this is not my opinion, this is what climate scientists are stating, and what I use a lot is peer-reviewed science,” Lindmeier says. “I use the trust I built up with my viewers and the public in general over 40 years so that they know that they can trust me when I say I’m giving them that peer-reviewed research, the accurate research.”

When the connection between climate change and weather events is straight-forward, the job is easy. And yet, according to Berardelli, this is not always the case.

“In other cases, the connection between climate change and weather is more gray and consensus has not been reached yet,” Berardelli says. “In those cases, it’s OK to tell the viewers that the science is not yet settled.”

The problem with causal links

However, Ward cautions that this is not the right relationship to be seeking.

“They probably shouldn’t ask, ‘Is that storm caused by climate change?’ They should ask whether it was influenced by climate change because there’s a much closer correlation between influencing than causing,” Ward said. “The answer may well be scientifically sound that (climate change) contributed to its frequency or severity, but not very sound in terms of whether that particular storm was caused.”

In relation to climate change’s influence, Gillis says that if and when events become more frequent, it is the job of a weather forecaster to report that.

“So when events happen, that we have the science…to say this is a lot more likely now that the climate is changing, it’s just irresponsible for people not to point that out on their weather forecasts,” Gillis says. “And the clearest case is heat waves. I mean if global warming means anything, it means that heat waves are going to increase.”

Ward also stressed the importance of not overstating climate change’s influence in weather events, such as flooding from storms.

“A good example is some of the storms that have hit the East Coast or the Gulf of Mexico, and some will say, ‘Well was that flooding caused by climate change?’ The answer may be no, but sea level is rising, in part because ocean temperatures are getting warm, so you’re starting from a larger foundation in the first place,” Ward says.

Berardelli also points to the importance of making the global phenomenon of climate change as local as possible.  In his forecasts, he talks about trends in local weather, such as temperatures or flooding, and talks about the impact these trends are having on his audience.

“We should show how those changes impact our viewers: should we plant our gardens earlier, buy more flood insurance and will our local ski resorts have enough snow to stay open?” Berardelli says.

Furthermore, Berardelli says meteorologists should be “empathetic about how people are impacted by climate change,” recognizing its uneven distribution, often affecting vulnerable populations the most.

In the end, Berardelli, Lindmeier, Ward and Gillis all emphasize that the meteorologist’s responsibility is to deliver the truth.

“Regardless [of politicization], they should not shy away from their human duty of leveling with viewers by telling them the truth and their civic duty as an expert in conveying the science,” Berardelli says.

Communicators have resources available to ethically and accurately cover climate science and weather. Lindmeier is part of the American Meteorological Society, which works to “promote the broadcast meteorologist to be the station’s scientist and use that as a way of talking about climate change.”

Climatecentral.org is another resource available to professionals that provides peer-reviewed science in localized contexts for broadcasters to use in their segments.

Lastly, National Climate Assessments are researched and compiled by the U.S. Global Research Change Program and delivered to the President of the United States and Congress every four years. Such assessments provide information on the impact of climate change on the U.S. and also break information down regionally. 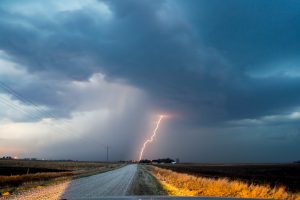