On December 15, more than a month after the 2020 Presidential election, the Electoral College officially named Joe Biden the 46th U.S. president-elect.

Looking back at this election cycle, it’s clear that news media had a lot to lose – election misinformation proliferated on social media and cable news, much of it casting doubt on the election process, and partisanship ran deep.

So, how did news organizations cover an election season like no other? How did outlets combat misinformation and disinformation in their coverage, prepare audiences for a delayed final call, and keep the pulse of the electorate? And lastly, what can the news media learn from this chaotic year as we plunge into the next news cycle?

Four media professionals break it down below.

A totally different kind of election

“What you saw was an extraordinary and unprecedented, to my mind, shift in news coverage where journalists were increasingly likely to say that the president’s statements were not based in fact.”

Michelle Ferrier, a journalism professor at Florida A&M University, says news outlets at all levels were successful in helping citizens understand how to safely vote during the pandemic and stay informed on the policies and positions of the candidates.

However, Ferrier wasn’t totally satisfied, noting that news organizations failed to accurately portray the disenfranchisement policies at all levels of government that affected voters, or to accurately depict the concerns of urban voters of color compared to white, rural voters.

“I don’t think the media has done a good job of explaining to the public the ways in which public narrative has been perverted and supported by misinformation (and) disinformation,” Ferrier says. “Our solution has been to put out more information to try to counter it, and that defensive posture has not served us very well and has actually, I think, done some harm to the very audiences of color we’re trying to cultivate.”

Anita Varma, assistant director of journalism & media ethics at the Markkula Center of Applied Ethics at Santa Clara University, says news media could have analyzed the role of the ongoing pandemic on voters more comprehensively.

“I think that [COVID’s] obviously been an uneven impact, but I saw less of an account of that, other than what it means to vote by mail, but it doesn’t really get at the issue of how COVID likely has changed a lot of voters’ priorities for what they’re voting for. What does it mean to say, ‘I support this candidate or another one’?” Varma asks.

Margaret Sullivan, a media columnist for The Washington Post, says many news outlets prepared their audiences for an election night in which the winner would not be announced, and that this led audiences to trust the media more when this in fact happened. However, Sullivan also says audiences were less prepared for election results to be disputed by President Donald Trump.

“Journalists may have found this concept a more difficult one to predict and communicate – it might have sounded far-fetched – so they didn’t stress it as much,” Sullivan says.

Daniel Kreiss, an associate professor of journalism and communications researcher at the University of North Carolina-Chapel Hill, observed that news outlets this year shifted their tone of coverage of Trump in the months leading up to the election.

Kreiss says for the last four years, media outlets covered everything Trump said, fact or not, because he was the president. This year’s shift began in spring and really took off in fall.

“Really, up until May, June, July of this year, we would cover statements like the president’s claims that mail-in ballots were fraudulent, for instance, or thousands of what he would call ‘illegal immigrants’ voted,” Kreiss says. “Statements that had no basis in fact, news outlets would cover them as news in and of itself because they were from the president.”

Kreiss saw this change from local news outlets to national media, including the moment many networks cut away from a Trump speech when he illegitimately claimed victory.

“What you saw was an extraordinary and unprecedented, to my mind, shift in news coverage where journalists were increasingly likely to say that the president’s statements were not based in fact,” Kreiss says. “Journalists were increasingly likely to not simply give the president a platform to make statements that were untrue and inaccurate and designed to persuade people that the election was illegitimate.”

“I think the media is still very much challenged in terms of how to position itself as a truth-teller in an age of digital technology.”

Now that news outlets have to debunk conspiracy theories as a part of their coverage of current events, it’s become even more important to create and repair trust.

Organizations like Election SOS, the Election Coverage And Democracy Network and First Draft worked to inoculate, or “prebunk,” the public against election misinformation by working in tandem with news media to share knowledge of communications research.

Axios reported this fall that leading social platforms Facebook and Instagram also alerted users about voting and mail-in ballot information on posts related to the election, in an effort to show users accurate information before they encountered falsehoods later on the platform.

According to Ferrier, “We’re recognizing that we, as a profession and an industry, are part of a larger attention and information economy of players, from social media to media organizations to independent propaganda organizations and bad actors, all of whom are trying to wrestle control of public discourse and narrative.”

While Sullivan says there was plenty of factual information from mainstream media outlets to go around this election cycle, the will to access it depends on the media consumer.

“There is a constant firehose of lies and conspiracy theories being blasted out, and the reality-based press has not found a way to counter that effectively,” Sullivan says.

According to Ferrier, domestic or foreign online trolls from Russia or Ukraine already have had the head start during the Trump and Obama presidencies. Over the next few years, she says news media will need to repair the damage of misinformation from bad actors, learn to engage audiences in more constructive ways, and consider the most effective and safest ways to disseminate information and do so despite the many threats journalists face.

Kreiss says journalists will need to carefully determine how to cover and combat conspiracies and misinformation campaigns without giving bad actors an even bigger platform.

Varma, who studies the role of solidarity in U.S. journalism, says that a “solidarity technique” would emphasize community-based reporting over parachute journalism and reframe complex issues like voter suppression as thematic rather than episodic. Thematic coverage would see suppression as a trend with broad effects, while episodic coverage reduces issues to an event here or there.

She says she was impressed with minority-led news organizations and election coverage from states like Georgia and North Carolina that examined systemic barriers to voter participation during this election cycle and countered a “vanishing voter” narrative in U.S. media.

“Audiences will always be dissatisfied with something, but I think that the best way to try to serve audiences, whether or not they view it as satisfying, is to tell them the truth,” Varma says. “And the more that U.S. outlets and journalists and editors can support truth-telling, I think the better.”

“If we lose them [the public], we lose everything, including the very conditions for the media’s own existence.”

Like the Election Integrity Project at the UW-Madison Center for Journalism, the Hearken-managed initiative Election SOS provided journalists with webinars, toolkits, and experts to confer with during a chaotic election cycle. Ferrier, who founded the organization Trollbusters, worked with Election SOS this fall by offering her services on how journalists can protect themselves from online harassment and other forms of targeted abuse.

“I think that kind of just-in-time education that I provided along with Hearken … was valuable in not taking journalists away from their work, but helping to build their resilience, strengthening their skills in the moment when they needed them to be able to do their work,” Ferrier said. “I think providing that kind of dynamic just-in-time education is really critical.”

Kreiss did not think one effort, in particular, had a bigger impact than another in terms of organizations and academics who were providing support during the election. He says that overall, the approaches this fall emphasized the importance of coming together to support the democratic process and facilitate a peaceful transfer of power. He notes that journalism’s first and foremost commitment is to the public.

“If we lose them, we lose everything, including the very conditions for the media’s own existence,” Kreiss said. 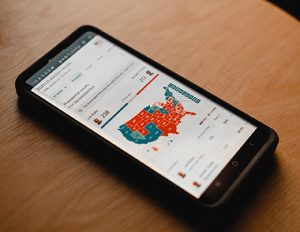