When news of another fatal police shooting broke in the U.S. in late October, the first headline Anita Varma saw didn’t include any mention of the victim’s name.

“The first news notification I got was about a Footlocker that was looted,” says Varma, an assistant director for the Markkula Center for Applied Ethics at Santa Clara University. “In that moment I didn’t know about Walter Wallace Jr., what had happened, the mental health crisis or the police shooting him,” says Varma. “It was sobering.”

Unfortunately, the tendency to foreground the physical destruction that follows some police shootings is common in the news media. Some news outlets have long emphasized incidents of property destruction or vandalism – categorized as “riots” or “lawlessness” – in their coverage of movements or issues affecting Black people.

Reignited after the killing of George Floyd, nationwide protests by the Black Lives Matter movement brought the call for defunding law enforcement to the frontline of American discourse. While such movements are not new, for many journalists working today, the challenges of covering this moment are.

From sensationalism to implicit biases, news media have struggled over the past year to understand and report on this movement, exposing the need for journalists and newsrooms to reconsider their role in representing, framing and sharing movement stories.

As journalists, editors and media professionals report on unfolding protests, the decision-making process to determine what details or stories are meaningful and relevant can often be hurried and hasty. This can result in misleading and largely inaccurate coverage that nonetheless holds the power to strongly influence readers’ perceptions of the event.

“It boils down to how journalists and editors are making decisions about what is newsworthy,” Varma says. “Is it only newsworthy if there’s a fire? Can it be newsworthy that this many people are concerned, and what are they trying to accomplish by coming together?”

Much of this coverage ignores peaceful congregations and organized viewpoints to instead concentrate on property destruction.

The New York Times attempted to foster conversation by platforming the opposing side, but when Cotton failed to ground his counterargument to the demands of the demonstrators the op-ed became an exercise in sensationalism. The Times failed to recognize or correct Cotton’s mischaracterization of the movement and in fact gave his ideas a broader audience.

THE LANGUAGE THAT DELEGITIMIZES PROTEST

Danielle Kilgo, a professor of journalism at the University of Minnesota, researches the way news outlets have used words such as “riot” to delegitimize protests of anti-Black racism. Her research shows  that anti-Black racism demonstrations tend to be trivialized in the media by a focus on dramatic moments rather than ideology.

“Mainly the way these protests become delegitimized is by focusing on the actions and extending the narrative that the protests are extremely disruptive, chaotic, not politically normal,” Kilgo says.

Kilgo found that demonstrations against anti-Black racism often lacked quotes from protestors involved, but highlighted views from officials who were opposed to the protests. The coverage also relied on sensational aspects to frame the story as an event rather than a movement. This lack of context, or meaningful exploration of what motivates protestors, cannot do justice to a growing social conversation.

Fair coverage of protests means using a framing that focuses on the movement’s demands. Even when reporting on individual demonstrations, journalists should first and foremost center the protest’s message and provide adequate context for their demands.

Characterizing social unrest as a riot fundamentally influences the reader’s perception of the movement and its intention, which tends to lower public support. Media scholar Douglas McLeod has researched a phenomenon he dubbed the “protest paradigm,” a tendency to portray protests as dangerous or without meaningful impact.

“Framing in terms of how you tell the story, a lot of times it is about looting and property damage, burning a police car, going into stores, stealing stuff, and there’s kind of an assumption that the people that were looting those stores were the protesters themselves,” McLeod says. “There’s kind of an implication that they weren’t interested in any social justice, but were interested in getting theirs. This goes without ever stopping to ask questions like, ‘Were the people who are engaged in looting actually part of the protest group?’”

Newsrooms commonly categorize all protestors and all property damage as part of the movement, without verifiable proof. McLeod, who has studied protest coverage and this paradigm for more than 30 years has seen the persistence of this misperception.

“One of the things that the media does is they kind of define things, define situations, define what happened and what went down. So what was the protest about? Looting? Anger? Civil disobedience? We tend to ignore the less dynamic things like children walking hand-in-hand, calling for peace and understanding that doesn’t make good TV news,” McLeod says.

When movements and protests seek out media coverage, the temptation is to shift their actions to fit the criteria set by the outlets for what is considered newsworthy. This often results in more violent demonstrations to gain the necessary news coverage. Journalists and editors thus not only have the power to shift public perception of a movement but to influence the movement’s actions.

While “objectivity” has been a journalistic cornerstone for a long time, its value to newsrooms is increasingly in question. Media outlets are beginning to grapple with their role in maintaining the status quo and the harm that has been done to the most vulnerable communities. A hard look at the way protest narratives are framed is a crucial place for this reevaluation.

“Starting stories with the perspective of the people who are showing up can be a major intervention,” says Varma, whose research focuses on journalistic solidarity with the public. “Once journalists and news outlets have that defined, they are much less likely to lose sight of that issue.”

The perspective of the individuals involved is critical to capturing the full scope of an individual demonstration. It can radically change the reader’s perception of the demonstration and help break down the movement’s intentions.

A sensationalized focus on destruction without the perspective of protesters largely ignores any insight into the movement. Instead, journalists must recognize the power they have in representing movements and use that power to accurately report the movement’s purpose.

“If we can get journalists, editors and newsrooms to shift to this fundamental, non-politicized ideal that human rights should be privileged and to look at our journalistic ethics that show this is what we are supposed to do in the first place, then that will plant the seed for a better future,” Kilgo says. 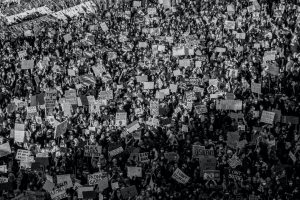