Long before she had her own show on CNN, journalist Abby Phillip wrote for The Harvard Crimson. Sarah Kliff, a top healthcare journalist at the New York Times, began her career reporting for Student Life at Washington University in St. Louis. CNN Chief Congressional Correspondent and University of Wisconsin-Madison alumnus Manu Raju was once an editor at The Badger Herald.

The list could go on, but the message is clear — student newsrooms are the training grounds for the next generation of storytellers. They are places where journalists learn their craft, find their voice and write stories with real impact. Within the past year, student journalists have covered COVID-19 lockdown protests, Black Lives Matter protests, and the Jan. 6 Capitol insurrection.

During protests, especially those sparked by traumatic events and racial injustice, the journalist’s responsibility to tell a true, complete story is often in direct conflict with minimizing harm. For instance, it is an accepted journalistic practice and Constitutional right for journalists to take photographs of public protests. But legal rights do not make an action right — protest photography and media coverage could cause protestors to lose their jobs, be charged with crimes, harm the mental health of vulnerable communities and even lead to police surveillance of reporters and activists.

Thus, student journalists are faced with a difficult task — to balance truth-telling and harm reduction and to do so while still in the process of learning about ethical journalistic practices. Some student newspapers, such as The Western Front at Western Washington University, are already in the process of embedding ethical practices into their protest reporting. For those looking to begin this process, here are three ethical considerations student journalists can use to guide their protest reporting.

ACKNOWLEDGE THE CONCERNS OF POTENTIAL SOURCES

When The Harvard Crimson asked U.S. Immigration and Customs Enforcement to comment on an “Abolish ICE” protest, student activists accused the publication of endangering undocumented students. Students involved in the Daily Northwestern controversy called the publication of protest photos “retraumatizing and invasive.” Though asking for comment and publishing photos of an event are accepted journalistic practices, protestors can still be concerned about the unintended consequences of such action.

“There’s lots and lots of people who feel that if they speak to folks who are part of the media, as they think of it, that they will be misrepresented,” says Anita Varma, assistant director for the Markkula Center for Applied Ethics at Santa Clara University. “And that often has nothing to do with the particular student journalist in front of them. That has to do with what they’ve seen happen in the past, or what they’ve heard has happened in the past.”

This observation is supported by research by Danielle Kilgo, the John & Elizabeth Bates Cowles Professor of Journalism at the University of Minnesota. Her research shows that media coverage of protests centered around on racial issues is more likely to delegitimize the movement by focusing on spectacle and violence. Much of this coverage also fails to represent the protesters’ demands and viewpoints accurately. This misrepresentation causes distrust of media institutions, student news organizations included.

Student journalists must first acknowledge this distrust and how traditional reporting practices may play a role in sowing it. Acknowledging and understanding protesters’ distrust of media can help inform how student journalists go about gathering sources and building trusting relationships with them. This process is important but not instant.

“Find patience as you start to build these trust relationships back,” Kilgo says. “Because trust is earned.”

BE TRANSPARENT, BUT SKEPTICAL

To continue building trust within the communities they cover, student journalists must practice transparency. The student journalist should know the reasoning behind their editorial choices and share them with their audience.

In their book The Elements of Journalism, Bill Kovach and Tom Rosenstiel put it this way: “Transparency … signals the journalist’s respect for the audience. It allows the audience to judge the validity of the information, the process by which it was secured and the motives and biases of the journalist providing it.”

Many news publications, both student and professional, do this by writing columns that outline the reporting process of a particular investigation. This letter from the editor of The Lantern, the independent student newspaper at Ohio State University, clearly states the reasoning behind controversial editorial decisions. The Harvard Crimson did the same after their controversy. But sometimes, explaining editorial choices is not enough.

“I think the Harvard students did an admirable job of explaining their practices and talking about newsworthiness and talking about fairness in coverage,” says Center for Journalism Ethics Director Katy Kathleen Bartzen Culver. “But let’s not just rest on the laurels — or lack thereof — of our long-term practices. Let’s instead interrogate when and why those practices damage trust and if there’s something else we could be doing differently. Doing it the way we’ve always done it just isn’t going to work.”

Openness and transparency are essential in ethical protest coverage, but they can only go so far. Though many standard journalistic practices — publishing photographs or quoting protesters at a public event — are legally sound, they still have consequences for all parties involved. Student journalists should constantly question the reasoning behind their editorial decisions and evaluate how those decisions affect the communities covered in the story.

Student newsrooms are the training grounds for the next generation of journalists. But when a future professional is in training, there will inevitably be mistakes.

“Mistakes are a part of life. Own up to the mistake but try to move that beyond just a statement of apology,” Varma says. “If a decision is made, and you publish something and then come back to it and say, ‘this is a bad decision’ … going forward, here’s how we’re going to make these decisions a little bit differently.”

Mistakes are a mechanism for growth, and to learn from mistakes, one must take action after the fact. The student journalist must constantly reevaluate their journalism and editorial decision-making processes and then make adjustments to produce ethical protest coverage.

“There is something specific that’s happening in the student context,” Varma says. “Which is that ideally, student journalism would also be space to figure these things out.” 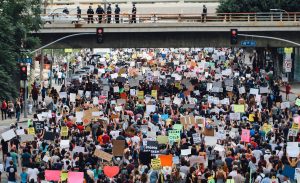