Emily Knepple is a 2021-2022 student fellow at the Center for Journalism Ethics and a senior at the University of Wisconsin–Madison.

When Sloane O’Cone, a multimedia journalist based in Augusta, Georgia, was sent to cover a local football game, she had to deal with more than what was happening on the field.

“I interviewed the high school football coach and the whole entire time, you can see his face and he’s eating me up with his eyes.” After filming, he had a slate of questions, including, “Where are you from? How old are you? Do you have a boyfriend?”

For female journalists, harassment, including the online variety, can be a part of the job. But for local journalists and broadcasters, harassment in the form of sexist attacks or inappropriate and invasive comments are often coming from a disconcerting place, their own communities.

Andrea Martin, who currently serves as the Director of Digital and Creative Services at Duke University School of Medicine, conducted research while a student at UNC-Chapel Hill’s Hussman School of Journalism and Media on online behaviors and local journalism.

“The local angle is extremely important because these journalists are our neighbors and friends,” Martin said. Not only are local journalists reporting in and on their immediate communities, but they are more accessible and more vulnerable to online scrutiny.

“The fact that I’m being bullied by moms and then sexually harassed by men, it’s just ruthless.”

While many newsrooms have policies in place for handling comments online and also have policies around “how employees should behave online,” Martin found that “there generally was very little training offered on how to handle harassment online, if any at all.”

To make matters worse, in a digital landscape, journalists don’t really have the option to unplug. Martin found that “more than half of survey respondents (51.6%) said online audience engagement was a high priority in their newsroom, and 35.5% of respondents indicated they have felt pressured to engage with audiences online at one time or another.”

For local reporters, being visible to audiences online is a strong way to generate a following and get stories out to the public. However, unlike politicians or other prominent public figures, local reporters normally don’t have a team of people running their accounts. They are on the frontlines of social media, increasing their exposure to a wide variety of harassment.

O’Cone said she receives online harassment from older women in the community, often when she’s covering topics such as mask mandates and COVID-19. “The fact that I’m being bullied by moms and then sexually harassed by men, it’s just ruthless,” O’Cone said.

Pacifist with a pencil

Jana Shortal, host of “Breaking the News,” a nightly news show on KARE-11, an NBC-affiliate news station in Minneapolis serving the Twin Cities, said there’s an unrealistic expectation for journalists to exist online. Shortal worries that talented new journalists, faced early on with negative comments, are going to leave the field.

Shortal, who is gender nonconforming and has been at KARE for 18 years, is no stranger to gender-based harassment. When Shortal began their career, local news followed a traditional structure, with a cis-gender male and female on screen.

“You basically needed to be someone that someone was attracted to to fit the norm,” Shortal said. “Harassment always came in that genre. I presented far more cis-gender, died my hair blonde, had an anchor bob, I played the role.”

For broadcasters, Shortal said, there’s an increased susceptibility to harassment. “With TV, we are still just the target. I mean, the tripod, the camera. It’s a light in.”

When Shortal landed their own show in 2016, they challenged the rigidity of what a broadcaster should look like. They began dressing in clothes they felt comfortable with and providing a platform for gender nonconforming people, which didn’t exist in local news in the area.

Although Shortal said that invasive messages about their personal life are “part of the job,” they also said it can be scary not knowing the limits of the people behind the screen. One time, Shortal, who is Jewish, received a package with a swastika on it. It was sent right to the FBI.

For Shortal, the non-stop harassment is deeply harmful to the profession. “I’m a pacifist with a pencil. I don’t, that’s not my jam. I didn’t sign up for that.”

Reporter Naomi Kowles, who is an investigative journalist at Channel 3000 in Madison, Wisconsin, has been dealing with gender-based harassment since her first day as a reporter.

When she began covering politics in northwest Wisconsin the experience came with significant commentary from people involved in city government. “From the very first day it’s either, you’re too pretty to be here, or you aren’t pretty enough to be here, or you’re too young to do this, or somehow you’re not cut out for this,” Kowles said.

Kowles has been proposed to online and is regularly told she should smile more on air even though the topics she reports on are often serious.

Like Shortal, Kowles talks about the worrisome sense of mystery that comes with online harassment, or the idea that you never know how far someone will go. It is the “really more kind of vaguely threatening or controlling” harassment that Kowles fears the worst.

Every reporter deals with some sort of harassment, but the reality can be different for different gender and racial identities, a fact that Kowles is aware of. The intensity of harassment of journalists who are women of color and/or members of the LGBTQ+ community is well-documented.

“I just feel like whatever I’m experiencing is usually three times more [for women of color] because they’re also dealing with racism and sexual fetishization,” said Kowles.

For Kowles, the take-home is that newsrooms need to have everyone’s back because “all personalities internalize [harassment] differently.”

Being a reporter is a hard job. There’s no resource for me personally, as a journalist in this industry, where I could go and talk about whether it’s racial experiences that I have to go through or just people being people and calling me very mean names because I’m a reporter, a female reporter.

O’Cone says that once she started reporting, she felt there was a line crossed when interview subjects began to ask her relationship status or make her uncomfortable on air.

“I think it’s hard because you want to come off as this happy professional person and you don’t want to misrepresent yourself as a young journalist and then also your station. I have not found a great way to handle it,” O’Cone said.

Alyssa Hui, who joined the team at NewsChannel20 and Fox Illinois in Springfield, Illinois, in June 2020, spoke of similar instances as a new reporter.

“I don’t know if it’s because of either my race or gender. I am a small, tiny Asian female. So I don’t know if that plays a role or anything,” Hui said of the unwanted attention she sometimes receives before going live.

“When someone just starts screaming at you or calling you names, what do you do in a situation like that besides doing your job and kind of reporting what you’re supposed to report to people?” Hui said.

Some advise young female reporters to have someone else with them when reporting. However, O’Cone and Hui both said they sometimes report alone because the station is short-staffed.

“When you are a female and you don’t have a lot of staff members, or you just don’t have a photographer to go with you, there are several instances where I’ve had to go alone out to do stories and I would get harassed and they would compliment me like, ‘You’re looking good today.’ Or like, ‘Oh, you look really sexy,’” Hui said.

Hui, like many young reporters, wants the industry to do better.

“Being a reporter is a hard job,” Hui said. “There’s no resources for me personally, as a journalist in this industry, where I could go and talk about whether it’s racial experiences that I have to go through or just people being people and calling me very mean names because I’m a reporter, a female reporter.”

Getting ahead of it

There is a slowly growing understanding in the media industry that media organizations need to start stepping up and taking responsibility to actually proactively protect and support their staff and their freelancers as opposed to just reactively.

Many journalists suggest that their newsrooms will have their backs if something were to go awry. But how can newsrooms prevent things from going awry in the first place? And what is the way forward for the industry as a whole?

Nonprofit leaders and industry activists are currently bringing awareness to the issue and working to better prepare journalists as a whole. Viktorya Vilk, PEN America’s Director of Digital Safety and Free Expression, has built an extensive online program for fighting online abuse.

PEN America is providing self-defense and digital safety training and workshops all across the country to everyone from reporters to journalism students. They are also engaging with media organizations to help build better policies and offer stronger services to “all kinds of folks across the newsroom.” And they have conducted research and launched advocacy campaigns.

One campaign, called “Sick of This Shit,” focused on the frustrations around how little is done to protect vulnerable people from online abuse. Vilk says that for reporters of color, this sort of harassment has been happening their entire careers, and the industry has chosen to ignore it.

“There is a slowly growing understanding in the media industry that media organizations need to start stepping up and taking responsibility to actually proactively protect and support their staff and their freelancers as opposed to just reactively,” Vilk said.

Journalism schools may also be a critical part of the solution. “Schools have been slow to catch up to the reality of what the internet now looks like,” Vilk said. “Preparation is much more effective than response when it comes to online abuse.”

The issue is an urgent one, affecting the workplaces, careers and mental health of many journalists, and reporters are no longer sitting silent. Kowles, who is vocal about this issue online, believes that real change is getting closer.

“We can’t be quiet about it. We can’t normalize it, we have to start calling out this behavior as unacceptable. This is not normal. It should not be normal in our industry. And I think the more we talk about it, the closer we get to changing it.” 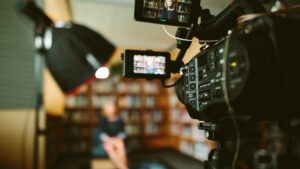