Zehra Topbas is a 2021-2022 student fellow at the Center for Journalism Ethics and a junior at the University of Wisconsin–Madison.

When investigative reporter Phoebe Petrovic received a data set containing records on the abusive way that Outagamie County Judge Vincent Biskupic was using review hearings, she was engaging in a particularly painstaking kind of investigative work: uncovering judicial misconduct in a system that is secretive, opaque and sometimes operating on an informal code of silence.

“It was just a ton of time and unglamorous investigative reporting work like data entry into spreadsheets,” Petrovic said of the report, which Wisconsin Watch and Wisconsin Public Radio published in July 2021.

Petrovic and colleagues had to pour substantial time and resources into the process of showing that Biskupic was using review hearings, a gray area of the law, to improperly monitor defendants’ behavior or push them to pay fines, fees or restitution.

When judicial misconduct like this happens, it can fracture the foundation of a functional judiciary while being very hard for reporters and the public to see. How then can journalists penetrate the secrecy of the judicial system, while at the same time ensuring that they’re producing ethical journalism?

Carrie Johnson, a justice correspondent for the Washington Desk at NPR, says that a more transparent judicial system is needed and that, in her experience, bureaucracy in Washington skews towards secrecy.

“While the federal judiciary has tried to put in place some new policies and reporting mechanisms for people who work in the courts, a lot of folks don’t think they’ve gone far enough,” she said.

At the federal level, the Judicial Conduct and Disability Act of 1980 established a procedure for filing a complaint on the basis of disability or misconduct against a federal judge or an employee of the federal judiciary. A complaint is sent to the clerk of the respective circuit court, and then to the chief judge of the circuit.

Lise Olsen, senior reporter & editor at the Texas Observer, recently published a book, “Code of Silence,” that chronicles the experience of whistleblowers trying to use the judicial misconduct review process. Lise says that while the 1980 law clearly states potential courses of action for judges, in many instances, these are not followed.

Olsen suggests a judge may not want to deal with a complaint, may have some sort of conflict of interest, may be opposed to “mess” with another judge, or may simply want to deal with it in the quietest way possible. According to Olsen, the situation the law created is “a secret system in which judges secretly judge each other” and “what I consider to be a lot of cover-ups of very serious misconduct.”

At the state level, the Wisconsin Judicial Commission investigates and prosecutes allegations of misconduct or disability on the part of Wisconsin judges and court commissioners. Complaints, even informal, made to the commission are not publicized unless public discipline is issued, potentially leaving judicial conduct a secret.

Dee J. Hall, managing editor and co-founder of the Wisconsin Center for Investigative Journalism, says that “the big challenge for reporters is that the majority of complaints never go public.” Since the commission is not required to disclose the facts of the complaint, “[they] might know what really happened, but the public doesn’t, and of course, a reporter can’t,” Hall said.

A code of silence

The culture of the courts contributes to a code of silence. “Wisconsin Supreme Court rules that any officer of the court is required to report misconduct when [they] see it. The truth is, they mostly don’t,” Hall said.

Judges are viewed as ultra-powerful people, and witnesses to judicial misconduct are often people who work in the courts. Some are unaware that the complaint process even exists. Others are afraid to file a complaint because of how it would affect their career.

Olsen says that more vulnerable judicial employees, such as law students completing clerkships, frequently fail to report judicial misconduct. These newly minted lawyers have often competed for an opportunity to work for a federal judge. “They’re brand new lawyers. They have their whole career in front of them, and if that judge gives them a bad recommendation or no recommendation, their career would be over,” Olsen said.

But even established lawyers are apprehensive to report instances of misconduct. Lawyers and judges have to work together and against each other. “If you get in a toxic relationship with one judge … and one of them files a complaint, [the lawyer] has a reasonable fear that the clients that they have might be treated more harshly because the judge doesn’t like you,” Hall said.

This culture contributes to the difficulties journalists face while investigating stories of judicial misconduct. Journalists want to avoid putting an attorney in a comprising position by disclosing that they are the source for an event of misconduct. But the dilemma becomes, is it worth it to put an attorney between a rock and a hard place in the future?

Many instances of misconduct aren’t even necessarily in the courtroom during a public session. “Many are ex parte communications [communications made from a judge or party outside the presence of the other party and off the record], and well, you’re not going to find out about those,” Hall said. “It’d be hard to even have an anonymous system. Like, ‘a criminal defense attorney said you did this.’ Well, they can figure it out in about five seconds.”

How can journalists ethically cover this secret system?

Why are they talking now? Is there something else going on that needs to be figured out in order to truly understand what the story is and where the story is?

For Hall, the first step in reporting judicial misconduct is understanding a complicated process. “For any reporter doing stories about judicial misconduct they have to first understand: what are the rules [judges] are not supposed to violate? And if they are alleged to have violated the rules, what is the process for deciding about discipline?” Hall said.

When it comes to interviewing for potential misconduct cases, Johnson emphasizes the power of strategic silence and allowing someone to get to a story in their own time. She is careful to consider the motivation of the person she is interviewing. “Why are they talking? Why are they talking now? Is there something else going on that needs to be figured out in order to truly understand what the story is and where the story is?” Johnson said.

Petrovic noticed a similar pattern in her reporting. “I [would be] talking to a lot of defense attorneys in the area about something sort of unrelated, and by the time the fourth person said, ‘Well, this judge has this particular thing, and it’s really unusual, and I’m not sure whether it’s legal,’ I’m like ok, we need to look into this,” Petrovic said.

For Olsen’s project, following a trail of publicly available information eventually led to the right sources. “When I was doing the book, I looked for women who had told part of their story somewhere, either in a news article or in congressional testimony,” Olsen said. “One name led to another and soon I had five names of people.”

While complaints are not public, dismissal orders are. Olsen looked through dismissal orders to get an idea of the types of complaints that were filed. “I was looking for complaints where judges or lawyers had complained. In this case, all I had was this very vague dismissal order,” Olsen said. “I was told that everyone involved in the case had been ordered not to discuss it, that almost all the witnesses were federal court employees…and the judge was required under the law not to talk about it.”

How then, can journalists go about finding the truth without breaching confidentiality? Is it unethical to approach those ordered not to discuss it? Is it wrong to persuade them to talk? And if they do, are journalists ethically bound to conceal their privacy?

Ethical standards in newsrooms can help provide guidance to reporters. Olsen ran material by in-house lawyers at the paper. Johnson says she has important conversations with editors before using unnamed sources.

Contemporaneous documents or memos can also be important. “If a person who has experienced harassment and trauma has spoken with people in their lives at the time of the incident and has any documents … those kinds of accounts are critical,” Olsen said. These are also the types of documents Petrovic and her team obtained in investigating Biskupic’s misconduct.

Olsen hopes her book will bring attention to the need to study ways to reform the system, make it more open and make it easier for people who want to file a complaint.

Johnson says reporters are increasingly taking it upon themselves to seek out information on their own. “In my experience, editors and reporters no longer take administration officials at their word.”

“I think our obligation is to the facts, and to accuracy, and to whatever agreements we have entered into carefully with the people who tell us information and provide us documents,” Johnson said. 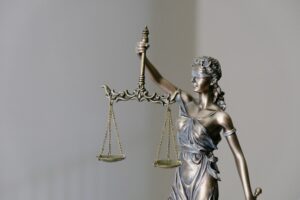