Zehra Topbas is a 2022-23 fellow at the Center for Journalism Ethics and an undergraduate student in the School of Journalism and Mass Communication at the University of Wisconsin–Madison.

When author and journalist Keri Blakinger was arrested in 2010 for possession of controlled substances, her mugshot and an unrelated photo of her flipping off the camera became clickbait for the internet.

Gawker wrote: “[she] posed in bikinis on Facebook – and hung out in a notorious drug den.”

The Washington Post called her arrest, “Another Ivy Drug Bust.”

Business Insider quipped, “Her sign-off was ‘Dazed and Confused.’ How fitting!”

While some media coverage included Blakinger’s long list of impressive achievements, including her enrollment at Cornell University, most reveled in highlighting her mistake.

In her memoir “Corrections in Ink,” Blakinger, who now reports for The Marshall Project, reflects on that coverage:

“All that’s true: the skating, the good grades, the awards, the promise. But so is this: For as long as I can remember, I’ve had a dark side. I tried to kill myself for the first time in my mid-teens, lingering by the side of the Pennsylvania interstate in the gloaming as I waited for cover of dark and debated whether the churning wheels of semis speeding along Route 30 would make for a quick end.”

In other words, telling the truth about Blakinger’s struggle with substance abuse would require much more than just a mugshot, a sensational headline and some schadenfreude.

Blakinger’s treatment by the media is just one example of how unethical reporting on addiction contributes to a news cycle that furthers harmful, often inaccurate and stigmatizing narratives about addiction.

These reductive narratives tend to reinforce the idea that addiction is the result of an individual’s weakness. In fact, when reporters point to one specific person as having a problem, they risk contributing to a culture of shame that affects how we view addiction and how much we end up investing in treatment.

A comprehensive effort to move the needle on addiction coverage

Recent changes to crime reporting and suicide coverage have come about as a result of repeated calls to rethink the use of mugshots, or the emerging practice of including hotlines and treatment sources for stories covering suicide. But so far, similar changes have yet to take root in addiction coverage.

Ashton Marra of 100 Days in Appalachia and Jonathon Stoltman of the Opioid Policy Institute teamed up in the summer of 2020 to write a reaction piece on an NPR story about addiction. According to Marra and Stoltman, the coverage of addiction, while factually correct, was an alarming example of a national news organization employing harmful and stereotyping language.

Together, Marra and Stoltman piloted Reporting on Addiction, a collaborative movement for both student and professional journalists that seeks to improve the way news media report on addiction and reduce the stigma and discrimination that people with substance abuse disorders face.

“We’ve really been focused from the beginning on making tools that are built by journalists and for journalists that include the evidence-based information, but do so in a way that they can actually use in their real life,” Stoltman said.

In conversations with stakeholders, it became evident that while many were passionate about the topic, knowledge of how newsrooms worked in practice was missing. A journalist working in the field could not review a 60-page how-to document and reasonably meet a deadline. Thus the team published a condensed style guide – a thorough one-pager to help journalists “stop perpetuating stigma through their reporting and start providing well-rounded coverage of addiction and recovery.”

In a series of focus groups, Marra and Stoltman also heard a common grievance among professional journalists: nobody had adequately prepared them to report on this topic during their time in journalism school or as new journalists in the field.

“We heard from professional journalists who had been reporting on this issue for at least a decade – some of them had won Pulitzer Prizes for their reporting on this topic – and they consistently said to us, ‘I wish somebody had even remotely prepared me for what I might experience when I got my first job and I had to cover this topic,’” Marra said.

Marra, who teaches journalism, noticed that her students at all levels were consistently pitching stories that touched on the topic in some form or another. While Marra incorporates Reporting on Addiction resources into her classroom, this was not the case for schools elsewhere across the country.

Marra and Stoltman sought out to create a journalism curriculum that has been piloted in five journalism schools this fall. “For student journalists, we really try to fit that solution journalism lens in there and empower them to also be a force for good and a force for change in their newsrooms,” Stoltman said. This will allow them to “understand how to interact in that newsroom with this newer understanding about addiction as a disease, and how to have that influence [their] writing.”

The curriculum includes the basics of addiction science and addiction medicine and how to incorporate empathy and trauma-informed techniques in their reporting.

Changing the narrative about treatment

So many of our media stories on addiction focus on repeat offenses – think of the local news site reporting on someone’s fifth DWI – rather than focusing on stories that show that recovery from addiction is possible. According to Dane County Circuit Court Judge Susan Crawford, who is active in the treatment court movement, news media need to provide the public with examples showing how people can and do change.

“I think it’s really important for members of the public to know that under the appropriate circumstances, people can receive treatment, and it is possible for addiction and underlying conditions that sometimes drive criminal behavior to be treated successfully,” she said.

Journalists should and need to do more to inform the public about the extent of treatments and medications available to those struggling. “I just want people to know that there are these evidence-based approaches that have good efficacy and work for a lot of people,” Stoltman said. “If we can have the media talk about it in a more nuanced way, and really inform the public about how far the evidence has come with treatment, I think that’s a really positive change.”

Crawford witnesses the life-changing effects of treatment court firsthand. “There’s a tendency for people who have committed a crime to just be branded with that criminal stereotype that follows them around for the rest of their lives, and that perception that people can’t change or just won’t change,” she says. “That’s not what we see in the treatment court. We do see people really working hard to address some of the underlying issues that brought them in.”

When working with a source, Marra said, it is important to let them tell you their experience and share it in a way that feels genuine to them. For journalists, that means validating their experiences through active listening and empathy.

“I think the ethics of this journalism really comes down to recognizing the responsibility you have as a journalist in choosing the stories that you share, the anecdotes that somebody may have shared with you that you’re going to use in your story, and the language that they may have used when speaking about themselves,” Marra said. “It’s not always black and white.”

Marra said if someone in an interview refers to themselves as a junkie, while it may be true to their feelings about themselves at that moment at that time of their lives, we must recognize how this language can impact an entire community of people: those in active addiction, those in treatment, or those successfully in long-term recovery.

An image attached to a story can also be problematic and distressing for someone with a substance use disorder.

Some newsrooms rely on journalists to conveniently grab photos on their phones while in the field, while others have several staff photographers and a photo editor who oversees the whole process. “The fix is training a journalist versus training a professional videographer, and that’s going to be a really different type of training,” Stoltman said. “We’re really excited for those resources to get out there because we know it’s a big problem.”

Ultimately, emerging and professional journalists must be the agent of change.

“These stories should not be clickbait-y.  These are really serious. They can be very harmful stories if we don’t cover them in the right way,“ Marra said.

Ethical coverage of addiction means no clickbait. It means moving forward with a much fuller understanding of treatment, and it must contain the key idea that recovery is possible. 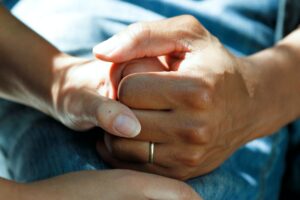