Zehra Topbas is a 2022-23 fellow at the Center for Journalism Ethics and an undergraduate student in the School of Journalism and Mass Communication at the University of Wisconsin–Madison.

Prior to coming to NPR in 2010, Johnson worked at The Washington Post for 10 years where she closely observed the FBI, the Justice Department, and the criminal trials of the former leaders of Enron, HealthSouth and Tyco. She was a fellow at the Nieman Foundation for Journalism at Harvard University from 2019 to 2020 and currently serves on the board of the Center for Journalism Ethics.

Her work has been honored with awards from the Robert F. Kennedy Center for Justice and Human Rights, the Society for Professional Journalists and the Society of American Business Editors and Writers.

This past year, Johnson has spent a considerable amount of time covering the Jan 6. hearings, the Oath Keepers seditious conspiracy trial and investigations of former President Donald Trump. We spoke with Johnson about her latest work and how she approaches the ethics of covering issues of law and justice.

This interview has been edited for clarity and concision.

You have extensive experience covering complex legal matters in a variety of national publications and mediums. How do you go about presenting information at the intersection of law and politics in a way that keeps the public engaged and in a way that is understandable for those not familiar with legal terms? How can newsrooms be more ethical in covering justice issues and legal affairs?

In radio reporting and writing for the ear, it’s important not to use legal jargon or to quote experts using those kinds of terms. Rather, I try to boil down a legal concept into plain language and ask sources to provide examples and precedents that are easier to follow. It can be as simple as saying, ‘When was the last time something like this (an indictment, a search of a former president’s residence, an impeachment) occurred?’

When it comes to ethical coverage on justice issues and legal affairs, we rely on lawyers for witnesses or the witnesses themselves. It is important to consider whether those people have a stake in the event or if they have an interest in portraying themselves in a certain way. We need to be clear about that and be as clear as we can with our audience about who the sources are, describe who they are, how they know something, and what we don’t know.

Often in broadcast, it’s important to say what we don’t know as what we do know. So being as transparent as you can with the audience really is a service in terms of letting people know what’s happened, what may be coming next in terms of the news and what’s not yet known, and leaving room for that uncertainty. The Justice Department investigates thousands of things every year, and not everybody who’s under investigation gets charged with criminal wrongdoing. You have to be kind of careful about that, and letting people know about that is important.

What are some challenges in covering the Department of Justice? Do you struggle to get access to certain individuals?

Generally, it’s challenging to cover the Justice Department because it’s involved in so many different things. Everything from prosecutions of drug crimes to investigations of former President Donald Trump to investigations of companies involved in antitrust issues like Live Nation. The challenge really is having enough energy to figure out what’s the most important thing to do that day and to have the energy and concentration to plan farther ahead for stories that can be really impactful and really matter to people.

In terms of access, it can be very difficult. People at the Justice Department are prohibited from discussing grand jury matters with us. A number of other things we want to know most about, for example — the investigation into national security secrets at Mar-a-Lago or the investigation into the Capitol riots on January 6, 2021, and whoever helped organize those — these are things senior Justice Department officials and FBI agents really are not supposed to talk about. So, it can be very challenging to get answers to those kinds of questions. We rely on court records and other people who may be witnesses in those investigations to help. But it’s very challenging to break news on those fronts. On day-to-day policy issues at the Justice Department, you usually can get information from the Office of Public Affairs or people who have worked at the DOJ in the past and maybe retired or went to work for private law firms. Those are all useful sources of information.

In recent years, one could argue that matters of the Justice Department and Supreme Court have become increasingly politicized. How do you reconcile this in your work?

Public opinion polls reflect that many people feel the work of the Supreme Court is more political than legal. Many reporters are covering the court more critically these days. They are highlighting how political groups and ideological forces are trying to influence the justices, such as the recent New York Times article on the Hobby Lobby decision. When big things are happening at the Justice Department, I try to cover not only the words and actions of public officials but also the outside groups (lawmakers, business organizations, nonprofit groups) that are seeking to influence decisions at the DOJ.

Does NPR have set guidelines or practices when it comes to covering matters of the DOJ, particularly as was the case with the Jan. 6 hearings? Is the fact-checking process different or more difficult?

I played a role in covering some of the January 6 hearings on Capitol Hill, but I did not cover every single one. I did some live coverage along with my colleague Ryan Lucas. I think in almost all instances, NPR ran live coverage and fully staffed these hearings — that is to say, it played the hearings for the audience. Then during breaks NPR analysts, reporters and hosts provided analysis. We had really wonderful people on Capitol Hill such as Claudia Grisales and Deirdre Walsh. We also had reporters who covered the Trump White House and those who were covering the FBI. In particular, in that hearing, the reporters focused on what Trump was doing with the Justice Department in November, December and into January 2021.

In fact, one of the most rewarding things I did this past year was an hour-long special after the first batch of hearings broke for the summer that a number of major member stations took and ran nationally. The special provided deep analysis including central moments from the hearings with reporters and hosts talking about what that all meant for the investigation. That was a really great thing to participate in, and I think it was very popular in terms of audience downloads and interest across the country.

When it comes to verifying information, court filings made by the Justice Department and sworn statements by the FBI that are filed with a federal judge, or a federal magistrate judge, are very important documents for us to have. We all either save those to our hard drives or print them out and consult them every time we do a story on a particular topic like the Mar-a-Lago documents or ongoing prosecutions related to January 6. What the Justice Department says in writing and what it says in court are really the backbone of our coverage. So it’s also really important to show up for important court hearings in front of judges to try to get the latest and best information. Attorney General Merrick Garland says the DOJ speaks in writing and in court, and that’s when it speaks on matters of great controversy and interest to the public.

What is your relationship with other journalists covering similar topics? Is it a competitive or collaborative environment when it comes to sharing information?

Coverage of investigations involving the former president is extremely competitive. There are huge teams in every major newspaper and network that are deployed. Some news organizations even have young reporters and interns staking out the grand jury at the courthouse. When I go to the courthouse almost every day for the Oath Keepers seditious conspiracy trial, I sometimes see between one and three reporters for major television news networks staking out the grand jury trying to see who goes in and who reached the building. It’s extremely competitive. Reporters are nice to each other, and they’re cordial, but there’s not a lot of sharing of exclusive information.

Did certain facts or findings that were uncovered during the hearings surprise you?

Some of the testimony was truly extraordinary. Cassidy Hutchinson, former White House aide to former Chief of Staff Mark Meadows during the Trump administration; her testimony was a real blockbuster. A lot of what she had to say surprised me. I still have lots of questions about what she said and what investigators are doing with that information. I also was bowled over as somebody who’s covered the Justice Department for 15 years or more now, to hear former Justice Department officials from the Trump years talking about the ways in which the White House, and Trump in particular, pressed them to take actions that were not in the best interest of the Justice Department and seemed to be just wrong. That was an extraordinary moment. It harkened back in some ways to scandals in the government from forty and fifty years ago. It was remarkable to see all of them testifying on camera about what was said to them in the warnings they were giving Trump in late 2020 and early 2021. 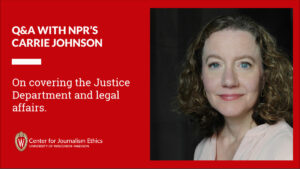