Blake McCoy is a 2022-23 fellow at the Center for Journalism Ethics and a graduate student in the School of Journalism and Mass Communication at the University of Wisconsin–Madison.

On December 7, award winning journalist and retired NBC News correspondent Pete Williams sat down with UW–Madison Center for Journalism Ethics Director Kathleen Bartzen Culver to discuss his path into journalism and the ethics of reporting on crime and the U.S. Supreme Court.

“I am puzzled by people who say they don’t know what they’re going to do when they grow up because I’ve always known I wanted to do this,” Williams said.

At just 9 years old, Williams started his own neighborhood newspaper. In high school and while earning his degree at Stanford University, Williams worked in radio. After graduation, he returned to his hometown of Casper, Wyoming. There, he worked as a reporter and news director at KTWO-TV and Radio.

After his time as Assistant Secretary of Defense, Williams transitioned back to journalism. Based in Washington D.C., he covered the U.S. Supreme Court and the Departments of Justice and Homeland Security for almost 30 years.

“Maybe it’s just because I’m somebody who likes rules,” Williams said. “But I think the law is fascinating.”

When asked about his transition from a political appointee at the Department of Defense to working as a reporter for NBC, Williams said he didn’t face ethical obstacles.

Williams described his role at the Pentagon as an “institutional spokesman” more than a political figure. “When I came to NBC, I had worked at the Department of Defense, so I clearly was not going to cover defense issues,” he said. “It would have been inappropriate for many reasons.”

“When I went to NBC News,” Williams said, “my job was to be loyal to the National Broadcasting Company, and I didn’t find that a difficult transition to make.”

During his career, Williams reported on many events including the Boston Marathon bombing, the 9/11 attack investigation and the Centennial Olympic Park bombing at the 1996 Summer Olympics, as well as major Supreme Court rulings.

“I started covering the law when I was still in Wyoming, and I always found it fascinating,” Williams said. “My legal name is Louis Alan Williams. Now think about those initials. So maybe it was predestination, I don’t know.”

To the audience in the Play Circle at Memorial Union, Williams described the journalistic ethics of reporting on the Supreme Court. He said that the goal of a Supreme Court reporter is to be neutral.

“Nobody should be able to watch your story on Nightly News or read it on the web and say ‘Aha! He wants that side to win,” Williams said.

“It’s not hard to maintain that neutrality because the court is built to have two sides,” he said. “You don’t have to go searching for the other point of view. It’s right there.”

Williams said the reason cases come to the Supreme Court is because they are difficult cases and questions to answer. When covering the court, he said his job was to give equal coverage to both sides of cases without indicating his personal point of view.

Politicization of the Court

When asked if we should be covering more of the Supreme Court and their process, Williams said the selection of what is covered comes at milestones in the cases and depends on the specific issue. For example, Williams said sometimes stories will air when the court grants a case, when the briefs are submitted and when a decision is made.

When it comes to reporting on the court as an institution in a climate of ever present politicization, Williams said it’s “worth noting” that supreme court justices tend to vote in ways aligned with the president they were appointed by, however that didn’t used to be the case.

“[Prior to 1985,] it wasn’t true that the people who tended to vote conservatively were all appointed by Republican presidents. Now it is true,” Williams said.

For those keeping an eye on the Supreme Court term, Williams spoke about the coverage of 303 Creative LLC v. Elenis and Moore v. Harper.

Williams said the 303 Creative case is difficult to cover because the Supreme Court has twice passed on the issues and because it is not clear yet what legal reasoning for the decision will be.

He said the question before the court is this: “Can a business owner refuse to serve a same-sex wedding, either because of religious views or free speech views?” and “Is a website design speech?”

In regard to Moore v. Harper, Williams said the case is huge and it’s complicated, but he doesn’t think the court will rule in favor of Moore and the “independent state legislature” theory.

“The extension of that argument is beyond just redistricting, Williams said. “If there’s any dispute over an election, the legislature gets the last word and the state courts have no role here.”

“I don’t think [the Supreme Court] is going to go for the theory. It didn’t seem to have enough takers,” he said.

A Career in Stories

When taking questions from the audience, Williams said some of the most memorable stories he reported on included the 2000 presidential election, historic Supreme Court decisions including the 2008 decision about the Second Amendment, and a story about an FBI agent accused of being a Russian spy.

When reflecting on the many ethical decisions he’s made throughout his tenure, Williams said he doesn’t think he would change any reporting choices he made.

“There were mistakes I made, I mean, I’m a human being,” Williams said. “Those are small and, I hope, forgotten.”

“[Ethical decisions] are the sorts of decisions that, as you know, journalists make all the time,” he said. 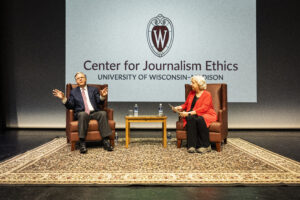