Last year was one of challenging questions for media in the airing of graphic video: from Fox News’ decision to air a brutal video of a pilot being burned alive by ISIS to a 60 Minutes package on the aftermath of a sarin gas attack to dash-cam footage of the shooting of Laquan McDonald by Chicago police. Reporters, producers, editors and news directors time and again faced difficult decisions about what to show, when to show it and how to label it.

But one video in particular stood out to me. In November, KUSA in Denver ran a package on the fiery crash of a Flight for Life helicopter. I was struck by the vividness of the story, the depth of the reporting and the intensity of the fire. But I was even more struck by how carefully the station and its staff explained their decisions to show parts of the video and withhold others. They took the public and the issues seriously, something we don’t see in news today as much as we should.

Feel like I’m back in my @UWJournEthics class with agonizing decisions being made at @9NEWS. You won’t want to miss their broadcast tonight

Wolves at the gate pic.twitter.com/yW3JWeUquY

News organizations have a clear choice to make on ethics as we head into a new year. For too long, we have treated our decision-making as something that is rightly left only to us. Too often, we put up walls between ourselves and our communities, preferring the protection of professionalism to the discomfort of having our decisions challenged. I would argue the time has long since come to change that orientation. We need to move away from our closed systems and find new ways to collaborate with our communities. We need an engaged ethics in journalism.

An apparent culture of vultures

A month before KUSA’s admirable approach, news media faced scrutiny in the aftermath of the shootings at Umpqua Community College in Oregon. As the scene was still active and people on campus tweeted about what they were seeing, reporters and producers started tweeting at them, prompting critics to question the underlying ethics, using terms like “vampire journalism” and “wolves at the gate.”

Hi, I’m SOCIAL MEDIA STAFFER from BROADCAST OUTLET. I’m sorry you’re in the middle of TRAGEDY, but can you follow me so I can DM?

While some, including Deadspin’s Barry Petchesky, defended the reporting, the case made clear that certain practices in journalism may make sense in the newsroom but are rejected by those outside it. Claims of newsworthiness — the defense inside journalism circles — are viewed more skeptically by many citizens.

The apparent value of information led a number of outlets to send reporters and cameras barreling into the apartment of the suspects in the deadly shootings in San Bernardino last month. The crews were there legally, as the landlord willing gave them access to his property, but the frenzy drew quick and withering critique.

A moment for introspection

Journalism faces a key moment. In addition to cases like these, where behavior in breaking situations is called into question, overall trust in news media is at a historic low. We also see eroding understanding of and support for First Amendment freedoms and failure to build relationships with varying communities, as was apparent at the University of Missouri, where protesters and even a communications professor blocked reporters’ access.

Yet it’s critical to remember that some of the work journalists are doing today is unprecedented in quality, depth and ethical reasoning. For instance, we started out 2015 questioning ethics after Rolling Stone’s retraction of its explosive campus rape story. But we ended it with ProPublica’s stunning investigation and its “An Unbelievable Story of Rape” — must-read journalism if I’ve ever seen it.

So the question becomes how can we continue to report bravely on often-difficult issues of public concern without falling victim to the failings of pack journalism, privacy invasions and needless harms. One way to accomplish that is to engage with our public on the ethics concerns that vex us.

What would an engaged ethics look like? In part, exactly as KUSA’s helicopter story looked. News workers consider the impact and potential for harm posed by their stories all the time. Why not cover those concerns in our stories? When we illuminate the difficult decisions behind reporting, the audience is better able to understand the processes and ethics of journalism. 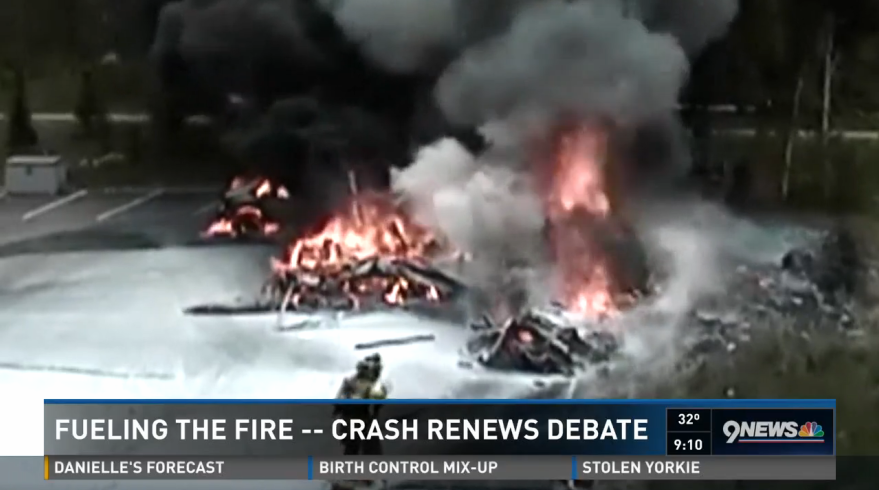 Screenshot of KUSA story on Flight for Life helicopter crashes.

But engagement doesn’t mean merely telling people why we do what we do. We have to aim additionally for meaningful ways to involve the public. This might include some specific steps.

Return of the reader representative. The decline of news ombudsmen — or public editors — over the last decade unfortunately came at the precise moment people had means to be more involved with news. Giving audiences a person on the inside with whom to connect on questions of quality and ethics engages a mobilized community, yet the U.S. has about half as many ombuds as we did in 2000 (a trend, by the way, that’s the reverse of gains in Europe, Asia and South America).

Margaret Sullivan’s smart work as Public Editor of the New York Times is an important example. The Times established the public editor role in the wake of the Jayson Blair scandal. One of the disturbing insights that arose from the Blair investigation was that sources had known Blair was fabricating information but never informed anyone at the Times. They assumed this was business as usual for news media. Roles like Sullivan’s establish a clear pathway for readers and a visible sign that the organization cares about its standards.

Getting beyond the trolls. When I do research with news workers on how they might involve the public and why they often don’t, the complaint I hear most frequently focuses on those who pollute online commenting platforms and social media accounts with personal attacks, misinformation and partisanship.  Yet comments and posts can raise valid concerns about coverage choices.

The Guardian’s audience, for instance, used commenting to highlight problematic imagery the outlet used as art on stories about anxiety, depression and mental health. If we’re going to use the technological affordances of the digital age to engage with our communities, we have got to put priority on how we make commenting platforms work.

Bringing the public in. It’s also time to forget the technology and get back to good, old-fashioned conversation. My work on ethics and emerging practices in journalism had led me to conduct focus groups with citizens, and my eyes have been opened by how they challenge some traditional assumptions and question the value of certain reporting. These kinds of sessions would be cheap, easy and incredibly valuable for more news organizations to engage in. This is not to say we automatically change our coverage because “the focus group said so.” But we can glean important insights and learn how to respond to the public’s lack of trust.

Boston public radio station WBUR did this in 2013, when it hosted a public forum following the Boston Marathon bombings. Civic leaders were part of a broad-based conversation, and the attendees had the chance to engage in the discussion, including asking questions of the Boston Globe about its coverage.

Engagement is a buzzword zinging around many newsrooms today, often in pursuit of audience. While it’s important to connect and collaborate with people who consume our news, it’s equally important to engage them in processes and ethics of how we create it.

This post originally appeared on MediaShift, where Culver serves as an education curator. It is republished here with permission.