With the goal of centering ethics in journalism practice and journalism education, in 2015 Burgess made a $1 million gift to the School of Journalism and Mass Communication to establish an endowed professorship in ethics. The donation launched the Center for Journalism Ethics, an international hub dedicated to the pursuit of fair, accurate and principled journalism.

“Jim Burgess had a vision for a place where journalists could ground themselves in rigorous ethical decision-making,” said Phil Haslanger, chair of the Center for Journalism Ethics advisory board. “What he helped create and foster at the Center of Journalism Ethics has grown into a national resource for journalists and teachers of journalism. We are so grateful for his vision, for his wisdom and for his generosity.”

Burgess grew up in La Crosse and earned his bachelor’s degree in journalism from UW–Madison in 1958, where he served as the business manager of The Daily Cardinal. After serving in the U.S. Air Force, he interned at several newspapers. He was business and production manager at the Missoula Missoulian and publisher of the Helena Independent Record, both in Montana.

He then followed in the footsteps of his father and grandfather, becoming the publisher of the La Crosse Tribune. He later served as executive vice president of Lee Enterprises, where he oversaw 19 newspapers spanning the Midwest and West Coast and then as publisher of the Wisconsin State Journal, a position he held from 1984 to 1993.

A 2008 inductee to the Wisconsin Newspaper Hall of Fame, Burgess had a long history of promoting high standards in journalism. In addition to serving on the board of the Center for Journalism Ethics, Burgess was Wisconsin Newspaper Association president from 1993 to 1994, a former member of the Associated Press board of directors and past president of the Inland Daily Press Association. He also served on the board of visitors for both the College of Letters and Science and the School of Journalism and Mass Communication, and received the School’s Distinguished Service Award in 1990.

“Jim’s commitment to journalism as the foundation of American democracy is an inspiration to us all,” said Hernando Rojas, director of the School of Journalism and Mass Communication. “We will remember him dearly at SJMC and will strive to keep his legacy alive as we train the next generation of journalists.”

“Jim always told me he never wanted, in his words, ‘trumpets and fanfare,’” said Kathleen Bartzen Culver, who serves as the current James E. Burgess Chair in Journalism Ethics. “That humility was his way. He never needed the accolades. But he needed to know that ethics would stay central to journalism. We will work our hardest to ensure that.”

A father of four, Burgess lived in Madison with his wife, Cathie.

“Jim was a straight-shooter who told you what he thought and wanted to know what you thought in return,” Culver said. “I will always be grateful for the total trust he put in us to build the Center and live out his ideals. I will miss him and our lively conversations dearly.” 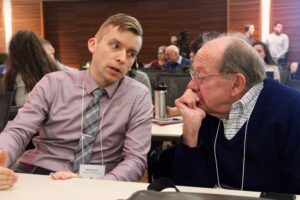