Contrera will accept the award May 17 in a ceremony at the University Club in New York City. The event will also feature a moderated conversation on journalism ethics with NBC Nightly News Anchor Lester Holt and award-winning journalist and author David Maraniss.

Registration for this event is open.

Named for UW–Madison alumnus and Pulitzer Prize-winning reporter Anthony Shadid, the award honors the difficult ethical decisions journalists make when telling high-impact stories. Shadid, who died in 2012 while on assignment covering Syria, was a member of the Center for Journalism Ethics advisory board and worked to encourage integrity in reporting.

The Shadid Award judging committee lauded the extraordinary thoughtfulness and care Contrera demonstrated in working with survivors of sex trafficking and showing how highly touted anti-trafficking laws are not being enforced.

Lucas Graves, associate professor in the UW-Madison School of Journalism and Mass Communication and chair of the committee, said this year’s winner edged out a strong pool of finalists.

“The care and nuance the Post exemplified in bringing out the stories of sex trafficking survivors stood out even among our exceptional group of finalists this year,” Graves said. “The result was a project that challenges the categories our criminal justice system takes for granted, and the reporting is already building momentum for reform.”

Graves also praised the other three finalists for the award:

“We couldn’t be more proud to highlight the incredible reporting by this year’s Shadid Award finalists,” said Lucas Graves, judging chair and UW–Madison professor of journalism and mass communication. “They come from very different newsrooms, but these journalists all faced difficult ethical choices working on very sensitive stories. They offer a model of courageous, independent reporting that shows real care for people affected by their work.”

Recent winners of the award include the Associated Press team that exposed widespread labor abuses in the global palm oil industry and the Miami Herald reporters who investigated how wealthy hedge fund manager Jeffrey Epstein covered up his crimes of molesting and sexually assaulting underage girls. 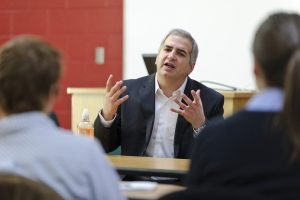 ABOUT ANTHONY SHADID: The award is named for Anthony Shadid, a UW-Madison journalism alumnus and foreign reporter for the Washington Post and The New York Times. Shadid won two Pulitzer Prizes for his courageous and informed journalism. He died in February 2012 while reporting in Syria.

Shadid had a special connection to the University of Wisconsin-Madison, its School of Journalism and Mass Communication and the Center for Journalism Ethics. He sat on the Center’s advisory board and was a strong supporter of its aim to promote public interest journalism and to stimulate discussion about journalism ethics.

ABOUT THE CENTER: The mission of the Center for Journalism Ethics is to encourage the highest standards in journalism ethics worldwide. We foster vigorous debate about ethical practices in journalism and provide a resource for producers, consumers and students of journalism. We honor the best in ethical journalistic practice and will not hesitate to call attention to journalistic failings. The Center is housed in the School of Journalism and Mass Communication at the University of Wisconsin-Madison.